All Changes in Call of Duty Warzone Update 1.45 - Patch Notes

Raven Software has rolled out a major update ahead of "The Last Hours of Verdansk". This major update will lead to the integration of Warzone and Vanguard. Here is an article highlighting all the important changes you can see in the latest Warzone 1.45 update.

For starters, Raven Software now has a separate Trello board for Call of Duty Warzone. Over the past year, Warzone updates and issues have been discussed on Treyarch's Black Ops Cold War board. But players can now log into the Warzone Trello board to get information about new patch notes, updates, events, issues, and playlist updates.

Apart from that, Warzone has also received a major playlist update for the coming weeks. The new Warzone playlist will run for around four weeks until November 30, as shown in the image below. 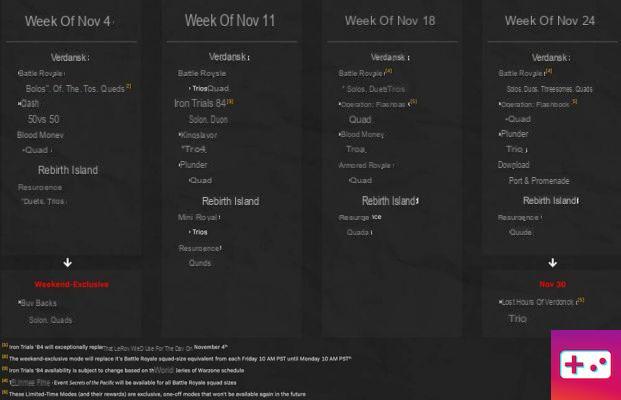 As mentioned in the playlist, players can expect to see a variety of rotating game modes ahead of Call of Duty Vanguard Season 1. The playlist includes: Battle Royale, Clash, Plunder, Resurgence, Iron Trials '84, Mini Royale and Payload, among others. Warzone will also feature limited-time events, including "Secrets of the Pacific" and "Operation: Flashback."

Related: How to Unlock Hammer and Sickle in Warzone and Black Ops Cold War

Finally, some other bugs have been fixed and resolved in the 1.45 Warzone update. This fixes issues with camouflage challenges, ghost perks, UI, blueprints, etc. All bug fixes applied to the game through this update have been listed below.

add a comment of All Changes in Call of Duty Warzone Update 1.45 - Patch Notes