All Jotun of the Tribes of Midgard 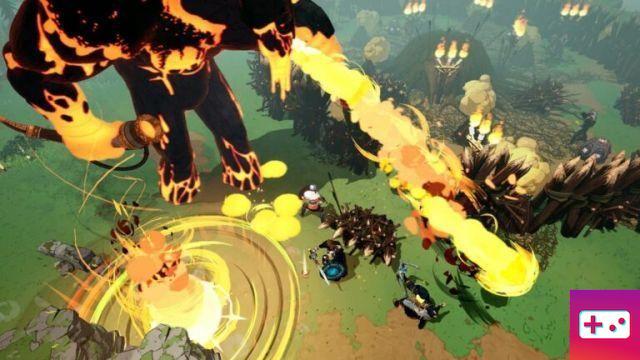 There are five Jotuns in Tribes of Midgard. Each has their own set of weaknesses, attack patterns, and types of resources they drop when killed. Here you will find what all of the above are and more.

How to Beat All Jotuns in Tribes of Midgard

The Jotuns, with the exception of the season boss, will appear like a clock and will all head towards your village from certain points on the map.

It will take time for these Jotuns to get to the village, but you shouldn't forget about them as they can often have large HP pools.

Related: Where to find and how to get all resources in Tribes of Midgard

Because of this, you'll need to head to these Jotuns as fast as you can and maybe bring a few other Vikings along for the ride. You can also beat all Jotuns very easily if multiple people attack it.

Having someone with a bow that is also their weakest element is also great. Bows do insane damage and even more if the person holds down the bow special ability via the Shift or L1 key.

Combine that with arrows which are a Jotun's weakest element, and you have a recipe for a quick dead Jotun. Dodging attack moves is also good practice and will help you last longer in fights.

In short, all you really need to do is roll whenever a Jotun's arms or legs move slightly, and you'll dodge most of their attacks.

Also try to avoid attacking them from the front, as sometimes you can lunge straight into an attack, such as when the Jotun Halgoi slams his huge sword.


That said, here's everything you need to know about all the Jotuns in Tribes of Midgard, how to beat them.

Check out more Tribes of Midgard guides on Tipsforallgames!

add a comment of All Jotun of the Tribes of Midgard