Kujou Sara is a four-star bow user who plays an important role in Inazuma as the adopted daughter of the Tenryou Commission and Raiden Shogun's most loyal servant. Despite her initially cold disposition, she has enough heart to please the Traveler on their adventures and some Crimson Oni in a longtime message relay on a bulletin board.

In battle, Kujou Sara excels as a support character with the potential to become a Burst DPS with the right build. It is often considered an Electro Bennett, but with a more complicated kit. 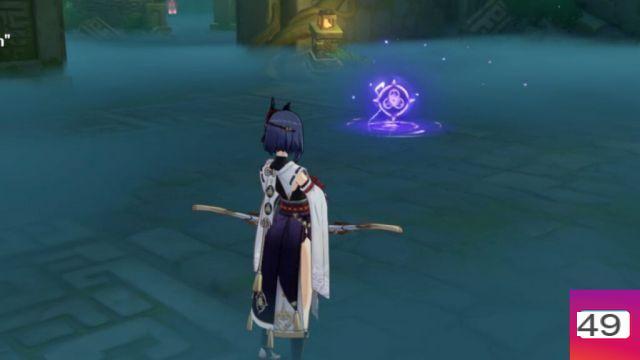 Sara's elemental skill teleports her back a few steps and deals electrical damage. After casting this skill, you must use a charged attack to hit a monster or the ground, which will summon a crow's feather to the area you fired.

At C2, the Crowfeather will form automatically without requiring a charged attack, but you still need to run into it to get the buff. Meanwhile, Kujou Sara's Elemental Burst deals electro-AoE damage and provides an attack buff similar to that of her Elemental Skill.

One of the big downsides to Sara's attack buff is that it only lasts for a few seconds. However, it is instant compatible, meaning characters with elemental skills or bursts that last longer than the buff's duration will benefit from the buff as long as their skill or burst is up. Examples include Xiangling, Beidou, and Kazuha's Bursts, all of which last longer than Sara's six-second buff.

Kujou Sara's attack buff scales with her base attack, which can only be obtained by leveling up and using weapons. The Artifact flat attack does not count as a basic attack, so it is very important to choose a weapon with as high an attack as possible.

As such, it's a good idea to give Sara a five-star weapon. His best choices would be the Skyward Harp or Elegy for the End. If you're planning on building a Burst Support Sara, go for the latter as it has an Energy Recharge sub-status and a passive that triggers even more buffs for the rest of your team. Four-star alternatives include Mouun's Moon, Alley Hunter, and Sacrificial Bow.

Related: Mouun's Moon: How to Get, Ascension, Stats & Who Can Use It in Genshin Impact

As a supporting character, Kujou Sara's best artifact set would be the four-piece Noblesse Oblige.

For artifact stats, consider giving him enough energy recharge until his elemental burst becomes capable of spamming. This not only boosts his damage output, but also maintains his attack buff nearly 100 percent of the time. Give him a Goblet of Electro Damage and an Attack or Energy Recharge Sand, depending on what your weapon is missing.

As an attack buffer, Kujou Sara can be inserted into any team. However, it is best used with characters that can take snapshots, including but not limited to Albedo (Skill), Ayaka (Burst), Kazuha (Burst), Klee (Skill), Venti (Burst), Beidou (Burst) and Xiangling ( Burst).

Check out our guide to the best 5-star Genshin Impact characters to help you decide who to shoot for next.