Author and references
Find all the tips to quickly complete the challenge "Inflict damage on opponents with Stark Industries energy rifles" corresponding to week 1 of Fortnite season 4. Season 4 Chapter 2 of Fortnite is available since August 27, and honors the Marvel universe. To recover all the rewards of the Battle Pass, sold for 950 V-bucks, players will have to complete several challenges, in order to recover XP, allowing them to evolve in this famous Battle Pass. Week 1 of this season 4 will allow you to recover some, in particular thanks to the challenges asking you todamage opponents with Stark Industries Energy Rifles.

How to Get a Stark Industries Energy Rifle

To get your hands on these famous stark industries energy rifles, you are simply going to have to kill Stark robots, since the latter, when shot down, drop these guns. These robots are found at all landing sites, visible with the blue smoke, where we also find Quinjets.

You will therefore have to very quickly get your hands on a weapon, eliminate a first Stark robot to grab his weapon. Once that's done, all you have to do is deal 1 damage with a Stark Industries Energy Rifle, which shouldn't be too hard. Damage inflicted on robots and humans is counted.

You will find robots and therefore Stark Industries energy rifles for sure in the places indicated on the map below. 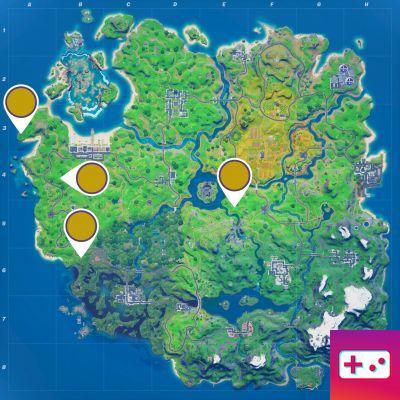