Author and references
The "Find Garden Gnomes in Coral Castle" challenge is one of the quests in Fortnite's fifth season. Find our tips and a map with locations to validate it. The fifth season of chapter 2 of Fortnite is finally available. As always, a battle pass is available, sold for 950 V-bucks, allowing you to recover many cosmetics. To unlock them, you have to earn XP, which can be earned by completing several quests, which are random, but also to unlock some cosmetic rewards for your characters. One of these challenges will require you to find garden gnomes in Coral Castle.

Where are the garden gnomes in Coral Castle?

Coral Castle being a fairly large place, finding these garden gnomes, which we were allowed to follow via hidden challenges last season, will not be the easiest task. To find them without wasting too much time, know that you must go to three specific places to flush them out.

One is to the south, slightly to the right, one in the center, next to the large building (in the corner of a rampart towards the water) and the last one to the north, behind the building in which the water passes over. below.

In order not to waste time, we have indicated that the map below, with as much detail as possible, the location of the garden gnomes in Coral Castle. 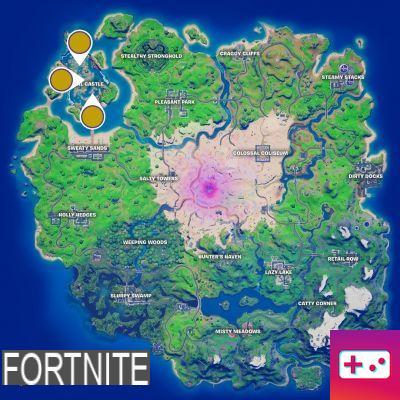 Like other quests, this mission can only be completed if it appears in your missions menu.
Audio Video Find garden gnomes in Coral Castle, season 5 quest
Find Garden Gnomes in Homely Hills Week 1 Challenge ❯