Author and references
The "Find Garden Gnomes in Sweaty Sands" challenge is one of Fortnite's fifth season quests. Find our tips and a map with locations to validate it. The fifth season of chapter 2 of Fortnite is finally available. As always, a battle pass is available, sold for 950 V-bucks, allowing you to recover many cosmetics. To unlock them, you have to earn XP, which can be earned by completing several quests, which are random, but also to unlock some cosmetic rewards for your characters. One of these challenges will require you to find garden gnomes in Sweaty Sands.

Where are the garden gnomes in Sweaty Sands?

The garden gnomes are, once again, in the game. Here, it will be necessary to find those who hide in Sweaty Sands, which is a place known to everyone in Fortnite. Three will be to be found, which are quite close to each other.

The first is its a coconut tree, to the east of the city, the second is in the western part, below the building next to the large pontoon while the last, further south, is against a house, behind a small flower box.

In order not to waste time in your research, we have indicated to you the locations of the garden gnomes in Sweaty Sands on our map below. 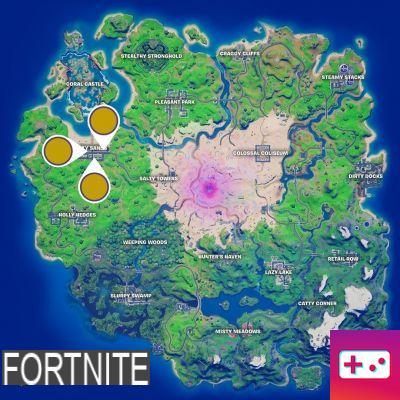 Like other quests, this mission can only be completed if it appears in your missions menu.
Audio Video Find garden gnomes in Sweaty Sands, season 5 quest
Finding Balls of Yarn at Catty Corner, Week 7 Challenges ❯