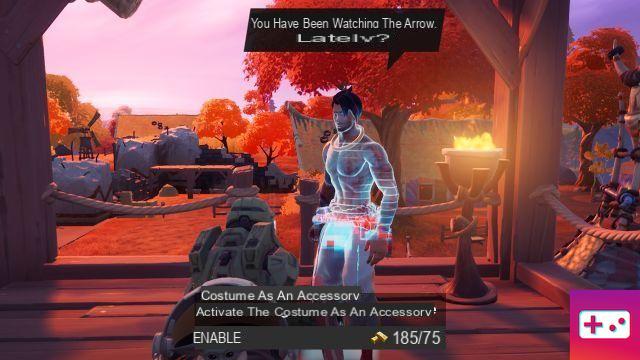 Find all the quests of the Arrow, and all our tips, in order to validate them quickly and unlock the rewards that go with them. As expected, Fortnite players were able to discover this Tuesday, March 30 a new series of quests, related to the character of Tarana, But also Jonesy. By completing them, you will be able to earn XP, but also a few variant skins, which is never a bad thing.

However, most of these quests are quite difficult to complete. That's why we've listed them for you below, with, if necessary, a guide so that you don't waste time.

For this first part of arrow challenges, so we have to focus on the Tarana character. You will be asked to complete nine challenges to validate everything, which will not be an easy task and will require you to get involved a minimum, since some quests are not obvious.

Below, you will be able to see the full list of Tarana quests and, if necessary, take advantage of one of our guides for some tips.

For this second part, we focus on the Jonesy, who are at the heart of several challenges. These are a little easier than those of Tarana, which will take you less time to validate them.

For this third part, we focus on Raz.
Other Arrow Challenges will be released in the coming weeks, to deepen even more lore of this new season.
Audio Video Fortnite: Arrow Quests
Fortnite: Jungle Stalker (Predator) Quests, Tips and Rewards ❯