Author and references
Players who have purchased the Season 9 Battle Pass will need to search for chip 19 in a spaceship building, equipped with the Vega outfit, in order to complete the hidden image of the Decryption challenge. Since May 9, when Season 9 kicked off, a new type of challenge has appeared alongside those offered for free or in the Battle Pass. Effectively, all players who have purchased the Battle Pass for this new season have access to a challenge called Decryption in which an image is hidden by 100 computer chips. To discover it, they will therefore have to go in search of these chips by completing various challenges such as reaching a specific level, obtaining a certain number of EXP, etc.

As the developers stated, 54 decryption chips can already be obtained on the occasion of the arrival of Season 9, but thereafter at least one new chip will be unlocked every day at 15 p.m.

To get chip 19, you will have to go southeast of Polar Peak, in the snowy area. However, you will have to remember to equip yourself with the Vega outfit in order to be able to recover it, an outfit which is received as a Tier 47 Battle Pass reward. The chip is located in an unnamed area, as shown on the map below, which includes a wooden platform on which the metal spaceship rests, it is at the front of the latter that you will find the famous chip .

When the chip is collected, it will then be necessary to go to the Challenges tab then Decryption and press box 19 to discover a piece of this hidden image. 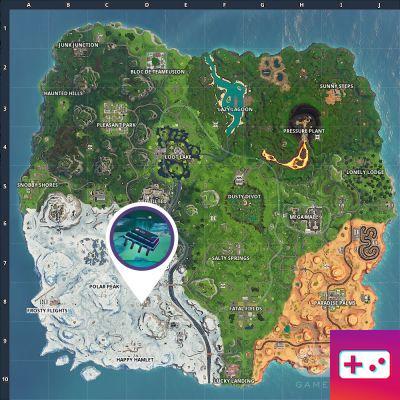 add a comment of Fortnite: Decryption Challenge, chip 19: Search with the Vega outfit in a spaceship building