Author and references
Find all the information on the Gluttons of Galactus in Fortnite, also called Gorger and how to find and destroy them to recover the loot. In recent days, players of Fortnite were able to discover many novelties, following the arrival of the new place called Stark Industries. Among these new things, we can mention the Gluttons of Galactus, being called Gorger in the original version. If you have already met them, know that you can interact with them, even allowing you to recover significant loot.

Where to find gluttons?

The Gloutons can be found anywhere on the map, regardless of game mode (solo, duo, platoon, and Team Rumble). However, these do not appear at the start of the game, since we can only see them once the first area is finished. At this time, a red beam will be visible in the safe area, thus signaling the location of the glutton. We therefore advise you to take the height or use a helicopter in order to be able to see it more quickly. You just have to go to this location to meet the glutton.

If you can't see this red ray, several locations seem predefined and come up quite often, which you can find on the map below. Do not hesitate to search in one of the areas indicated, to perhaps find a glutton. 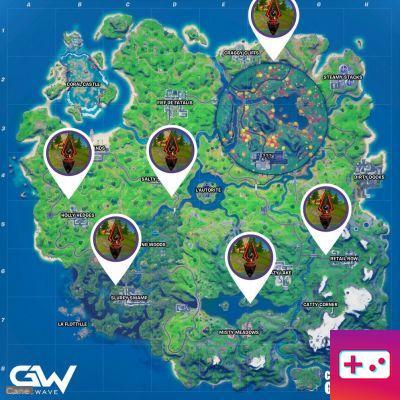 How to beat the Gluttons?

When you're in front, you're going to have to shoot this glutton. However, only his central eye and the two yellow parts on the side can take damage, while this one will not hesitate to inflict damage on you. A bitter struggle is looming, especially as the glutton occasionally drops small drones, which we advise you to destroy since they will allow you to recover a nice stuff in order to put the ground more easily glutton, in particular thanks to the overpowered weapon which is recoverable.

When the glutton will be on the ground, after having inflicted heavy damage on him, you will be able to recover weapons of golden and purple rarity in particular, but this will also allow you to unlock a card to fill in while gaining the XP that goes with it.
Audio Video Fortnite: Find and Destroy Gluttons (Gorger)
Fortnite: Find the hidden letter T on the Shipyard Trading loading screen ❯

add a comment of Fortnite: Find and Destroy Gluttons (Gorger)