Fortnite: IO Guards, where to find them in season 8?

Author and references
The IO guards are still present on the island of Fortnite in season 8. We show you their location on our map so that you can find them. With the new season of Fortnite, many changes have taken place, with the appearance, in particular, of cubes and monsters following the destruction of the mother ship. The monsters are the new major threat of this season and are merciless towards the players, but still allow us to recover some resources and weapons by defeating them. However, and even if they are less numerous, the io guards are still present on the battle royale island.

Where to find IO guards in Fortnite in season 8?

Even if we meet them less often, Epic Games asks you, in one of the challenges of this season 8, toeliminate IO guards. As a result, a multitude of players are trying to find out where they have the best chance of getting their hands on these terrible IO guards, who were able to withstand the events that we experienced with the end of season 7.

Currently these are six IO guard slots which can be identified, but this may change during the season, in which case the map below will be updated.

Contrary to before, the io guards are no longer in large groups, but only alone or in pairs, which can make challenges that require you to eliminate several of them redundant. Especially since other players have been able to pass before you and completely clean up, which will require you to go to another place. 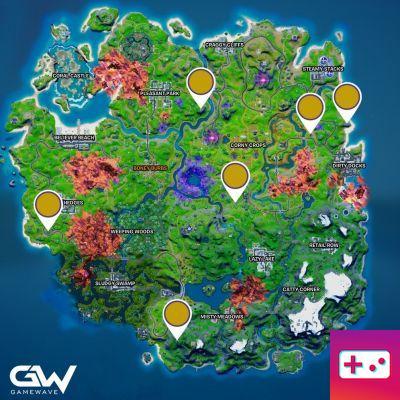 You can find the location of IO guards in Fortnite on our map.

As you notice, you are more likely to find some in the northeast part of the map, especially between Dirty Docks and Steamy Stacks. To the south, only the mountainous region west of Misty Meadows is inhabited by these IO guards, while in the west we only find them south of Holly Hedges, which has regained its former name.
Audio Video Fortnite: IO Guards, where to find them in season 8?
Fortnite: Goodnite, find codes for Creative mode ❯

add a comment of Fortnite: IO Guards, where to find them in season 8?