Author and references
Find the location of the six guardians of Fortnite, the new bosses arrived with the launch of season 6 of the battle royale. Season 6 of Fortnite brought its share of new features, as always. Among them we find in particular wild animals, which will allow you to harvest certain resources, but can also be tamed. However, players were able to discover new bosses, six to be precise.

Location of bosses (guardians) in Fortnite

As you can see, following the slight map change, a tower has appeared at Arrow. This one is in the center of the map and seems to be more or less connected with six others across the island, in the more primitive region, marked with an orange color on the map and in game. Each of these towers is accompanied by a guardian, which when defeated drops some nice loot.

Here is their location:
These six guards are important if you want to collect the Arrow's jump boots (more info here).

However, these are not the only bosses of this season 6, since we find five others, spread all over the island:
If the last four are ordinary NPCs, who will however leave you a nice loot if you defeat them, Spire Assassin, will allow you to obtain a mythical weapon. 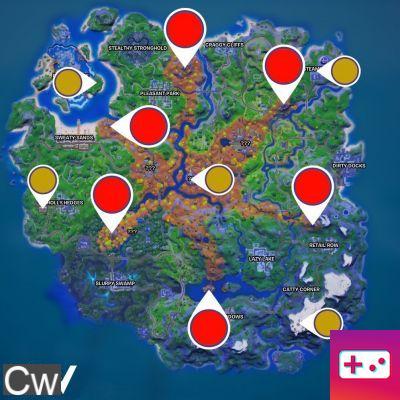 add a comment of Fortnite: Location of bosses (guardians) in season 6