Author and references
NPCs are back for Fortnite Season 6, along with some new faces. Find the location of all Fortnite characters below. Like season 5, this season 6 of Fortnite features NPCs, which can be found all over the map, so players can perform various tasks. Whether it's to complete contracts and collect gold bars, recruit one of these characters to be an ally, improve a weapon or even confront him, there are many possibilities with these NPCs.

As you can see from the map below, via fortnite.gg, we find these NPCs all over Fortnite Island, but some have multiple spawn points. That is, they are not always in the same place and their location varies from game to game. The center of the island and the southeastern part are the two places where the characters are less present. 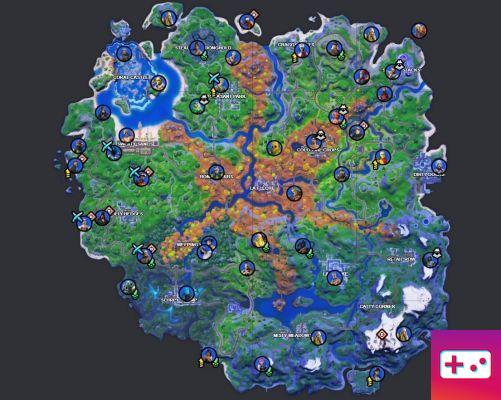 Regarding the meanings of the logos you can see next to some of these NPCs, here they are:
This map will be especially useful if you are looking for a specific NPC for whatever reason. In addition, over time, challenges related to these characters may be implemented, in which case you may need this card. A little reminder if you are not used to NPCs, to interact with them, just approach them and press the button indicated. Be careful though, if you get hostile and shoot them, they won't hesitate to retaliate.

If the spawn of NPCs were to change, or new characters arrive, we will of course update this map, so that you are not lost.
Audio Video Fortnite: NPC Locations (Season 6)
Fortnite: Season 5 event, Devourer of Worlds, when and how to participate? ❯