Fortnite: Raptors, where to find them and how to tame them

Author and references
Raptors were introduced to Fortnite on March 30 and can be tamed. We tell you how to do it, but also where to find them. As some rumors suggested, raptors have appeared on the island of fortnite following the 16.10 update, rolling out to servers on March 30. Of course, these new wild animals can be tamed to accompany you on the battlefield until the end of the game.

Where to find raptors in Fortnite?

Like wolves, we find them all over the Fortnite map completely randomly. However, if you want to maximize your chances of finding them, you should focus your search on the orange area of ​​the map, prioritizing Weeping Wodds, the south of the Arrow, but also the north of Retail Row. After several games, we can say that we find them very often in these three places (see map), although that does not mean that you will always find them here. 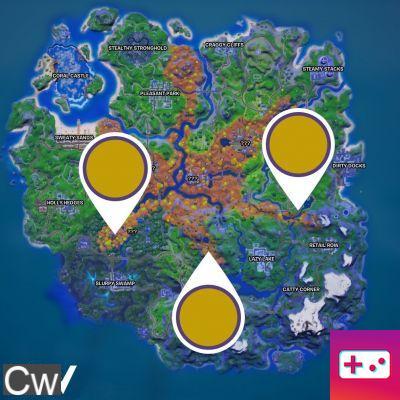 If you decide to kill the raptor, then you will get 4 units of bones.

On the contrary, if you prefer tame those raptors, you will first have to equip yourself with fish, at least two, to throw them. If you've ever tamed boars or wolves, you should know how it goes. Otherwise, know that you will have to throw the fish close to the raptor, but not too far from you either, and approach him as soon as he consumes them. Next, you will have to press the indicated key to tame it.

Once the operation has been carried out, which is not without risk, the raptor will then be your ally and attack your enemies. Being endowed with many health points, it could very well be useful to you for the final victory.
Audio Video Fortnite: Raptors, where to find them and how to tame them
Fortnite: Cars, release date, stats, information and details ❯

add a comment of Fortnite: Raptors, where to find them and how to tame them