Author and references
In addition to having to visit all Expedition Outposts, players will need to use a ready-made Rift or Rift in multiple matches in order to claim 5 stars. On this Thursday, a new week begins in Fortnite, and who says new week also means new challenges! As usual, players who have previously purchased the Battle Pass for this seventh season must complete a series of challenges in order to obtain stars and thus collect various rewards of all kinds. Battle pass, which as a reminder, is available in the game store for 950 V-Bucks, or 9,49 euros. Only, as you have known for some time now, players who have not purchased it can also perform challenges to increase their level, which is the case with this challenge.

So for this week 7, all players will have to use a rift or a ready-made rift in three games in order to recover 5 stars. As a reminder, the rifts on the map may not be there every time you start a game, except for those present in Wailing Woods and once a player uses one, it may also disappear several seconds later. The challenge offers an alternative by asking you to use a ready-made fault, but you still have to manage to loot one...

In order not to waste time in your research, you will find on the map below several locations of these faults. However, we advise you to go to the Wailing Woods side where several faults are permanently present and will allow you to complete this challenge very quickly. 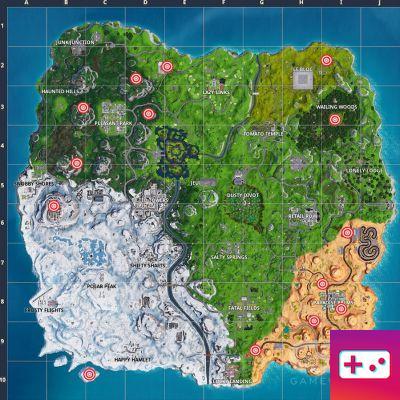 add a comment of Fortnite: Week 7 Challenge: Use Rift or Ready Rift in Multiple Matches