Fortnite: Week 8 Expedition Challenge: The Hidden Banner is on the Lake

Author and references
Once the eight-week challenges have been completed, all players with the Season 8 Battle Pass will be able to obtain an additional banner hidden in the loading screen. For several seasons now, players who own the Battle Pass have been able to complete the challenges offered each week in order to have more cosmetics and rewards. Only, at the end of these various quests carried out, they can also get an extra tier star thanks to the Expeditions challenge. However, since Season 5, Epic Games has fluctuated between a star and a banner to find from the loading screen, and for this eighth week, it is indeed a banner.

So, in the same way as the previous weeks, players will have to complete all the challenges of these eight weeks, in order to unlock the loading screen, present above. Hiding in this image is a clue to the location of the banner, and as you can see around Ruin, the coordinates B6, B7, C6, C7 have been inscribed. This is where players will have to go to be able to collect it.

For it, it will therefore be necessary to go to the point of intersection of the coordinates B6, B7, C6, C7. Players will find themselves in the middle of the frozen lake on the small snowy mountain. 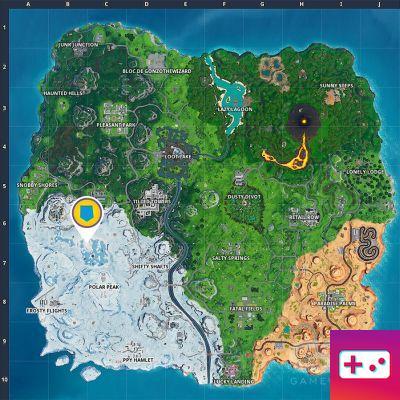 add a comment of Fortnite: Week 8 Expedition Challenge: The Hidden Banner is on the Lake