Fortnite: When does Chapter 6 Season 2 end? 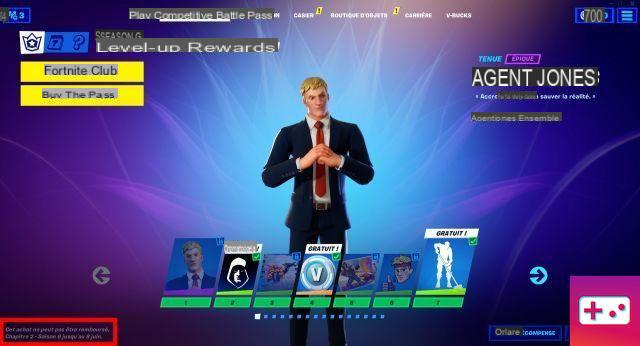 The date marking the end of Season 6 of Fortnite Chapter 2 is, it seems, already known, since it is more or less displayed directly in game. Available since this Tuesday, March 16, after a solo event which saw Point Zero being destroyed, the fortnite chapter 6 season 2 is available. Players were therefore able to discover many new features, whether in terms of gameplay with the possibility of crafting a few items, or on the island in general, with new points of interest and wild animals, which will attack you, but can also be of great help. Of course, a new Battle Pass is available for players, which allows them to recover many exclusive cosmetics, in particular thanks to the special challenges set up by Epic Games. However, this Battle Pass, dear to fans of Fortnite, also seems to indicate season 6 end date.

When does Fortnite Season 6 Chapter 2 end?

Indeed, when players purchase the Battle Pass, a message referring to the refund policy indicates that the current season will end on Tuesday, June 8, 2021, i.e. 104 after its launch, which more or less coincides with Epic Games' habits, except in recent seasons which have been extended several times.

This therefore means that players will have approximately 14 weeks to complete all of the challenges offered. However, we are not immune to a postponement, as experienced in seasons 1 and 2. The latter lasted 128 and 118 days respectively, compared to approximately 70 to 80 days in chapter 1.

However, this does not mean that the season 7 will be launched immediately after, since seasons usually start on Wednesday or Thursday. But since this 6 season started on a Tuesday morning, Epic Games could reiterate in June, for this season 7. We will study this question when the time comes.

In the meantime, you can find all the challenges of Fortnite for this 6 season directly in this guide, so as not to miss anything.

add a comment of Fortnite: When does Chapter 6 Season 2 end?