Author and references
Landing with a witches broom is one of the challenges of "Fortnite Nightmares", the special Halloween event. If you don't know where to find witch brooms, we explain everything to you. Like every year, Epic Games celebrates Halloween with his community. If at first only skins could be unlocked, the studio moved up a gear this October 19 with an event worthy of the name. A special game mode has returned, Assault of the Horde, the battlefield as we know it has also taken on the colors of the horror party. For the occasion, several small challenges have appeared, asking you in particular toland with a witch's broom.

Where to find witch brooms in Fortnite?

Unlike some years, when the witch broom spawned in very specific places, it seems that for this 2021 version of Fortnite Nightmares the broom be brought into the game as loot. We find them everywhere, on the ground or in chests with a lot of luck. Those witch brooms are Legendary items and therefore have the color gold.

In our case, we found some around Corny Crops and its surroundings. Don't hesitate to wander around the Fortnite map, you will eventually come across it, by chance or not. As soon as you see a golden glow on the ground, check if it is not those famous broom.

Once in possession of a witch broom, the challenge is not yet validated, since you will have to land five times with it. Nothing could be simpler: use the broom 5 times. Note, however, that 20 seconds of recharging are mandatory between each use. 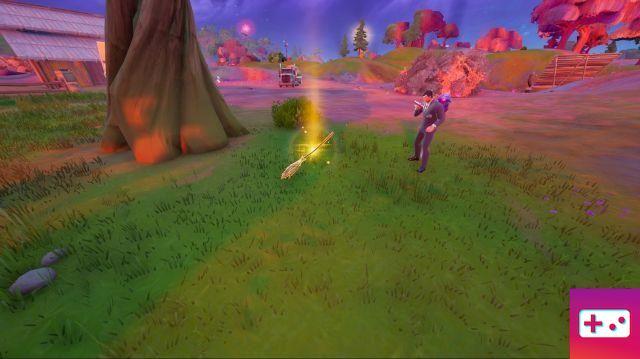 add a comment of Fortnite: Where to find witch brooms? Nightmares Challenge