Fortnite: Wolves, where to find them? (season 8)

Author and references
Wolves are still present on the island of Fortnite for this season 8. We show you their location on our map so that you can find them. With the new season of Fortnite, many changes have taken place, with the appearance, in particular, of cubes and monsters following the destruction of the mothership. The monsters are the new major threat of this season and are merciless towards the players, but still allow us to recover some resources and weapons by defeating them. However, and even if their location has changed, Wolves are always in the game.

Where to find wolves in Fortnite in season 8?

These wild creatures appeared in Season 6 and, two seasons later, still threaten players who get too close to them. However, as we told you, their spawn point has been changed somewhat, which makes it harder to locate them.

At the start of the game, before they are hunted or go about their business, we find them in the south, west and a little north, but very few in the center and on the east coast. To maximize your chances of find wolves quickly, we advise you to go to Weeping Woods and its surroundings, since it is here that we find the most.

Note, however, that once the game is well advanced, Wolves may become harder to find, as some may have been hunted by other players. Therefore, if you have to validate a challenge related to Wolves, we advise you to do so within minutes of landing. You can find on our map below the different places where Wolves can be seen. 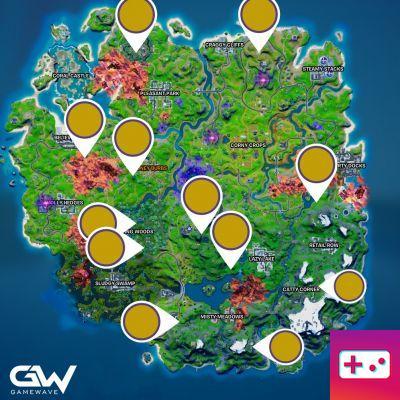 Once killed, Wolves yield meat, useful for gaining VPs. However, it is advisable to be well equipped before facing them, given that they are quite aggressive and rather robust, if we compare them to boars. You will need a good weapon and a lot of ammo.
Audio Video Fortnite: Wolves, where to find them? (season 8)
Fortnite: XP Coins, where to find them? ❯

add a comment of Fortnite: Wolves, where to find them? (season 8)