In the upcoming MMORPG Ashes of Creation, players will develop their archetype roles from the start of the game, so once level 25 is reached, the ability to unlock a secondary archetype and thus create a new class will become available. Classes will introduce new abilities and greater role-playing opportunities.

How do classes work in Ashes of Creation?

Classes are the combination of two archetypes. After unlocking access to a secondary archetype, players can merge these two roles to hone in on specific skills they would like their characters to possess.

Related: What are nodes in Ashes of Creation?

For example: if you primarily want to role-play as a bard, but are drawn to the combat prowess of combat, you can mix the two archetypes into a class of your choice.

For more information on how archetypes work, check out our guide, Best Archetypes to Choose from in Ashes of Creation. 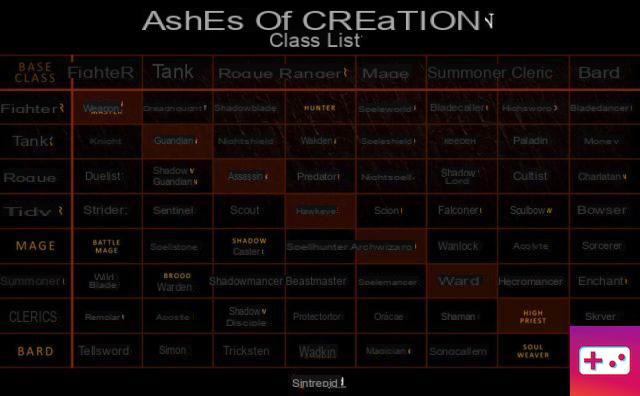 With Ashes of Creation still in its first stage of Alpha testing, classes have yet to be introduced into the game mechanics. However, the table above, provided by Intrepid Studios, outlines the class possibilities that will be available to players by reaching level 25 and choosing a secondary archetype.

Feel free to use this chart to plan your primary archetype during character creation, as this decision is final and cannot be changed later. Secondary archetypes are moddable, but will likely involve traveling and paying a minimum fee.

For more details on the game, check out All Playable Races in Ashes of Creation or see what player housing features will be available.