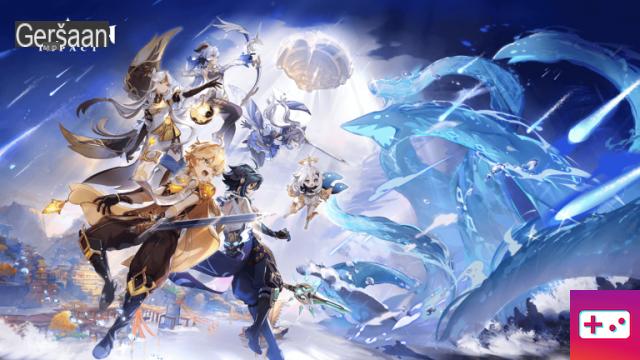 Genshin Impact has taken the world by storm and now fans are already looking forward to the next update to come. MiHoYo is gearing up to keep the content flowing and the hype growing.

We have compiled all known and leaked information from various sources. At this time, we're pretty confident that the majority of this information is correct, but some things might change by the time the update is released. But as always, take it all with a pinch of salt.

Many thanks to Zeniet, AE Entropy, Project Celestia, Honey Impact, Lumie and Arkywzx.

Genshin Impact version 1.6 update is scheduled for June 9, 2021. This is subject to change, but from miHoYo's own official message from the production team, they are trying to arrange an update schedule consistent every six weeks.

Here's our roadmap for when updates should be released. However, anything after 1.3 is purely assumed based on the six week update period.

Remember to take everything with a pinch of salt, all information comes from beta, rumors or mere speculation.

A few new characters have been leaked but not confirmed. According to leaker Arkywzx, two new characters are coming with Genshin Impact 1.6. They are Yoimiya and Kazuha.

Here is everything we know but all information is subject to change.

Yoimiya has been dated to be a five-star Pyro Bow user, but her character model has yet to be found. We know she is 100% a playable character by Ayaka having a voice over her. Thanks to Genshin Honey.


Organizing festivals and ceremonies is the responsibility of the Shabugyo and shrine maidens, and our fireworks manager really knows how to create an uplifting atmosphere. Although this summer, I decided not to ask him to supervise the fireworks because... I don't want Tohma to apologize to the fire crews again.

Kazuha has been datamined to be a five-star Anemo Sword user, but his character model has yet to be found.

Regions are what many players expect in Genshin Impact. These add whole new areas to explore, for new materials, secrets, and more. A few regions have been leaked, but they haven't materialized yet.

Inazuma was leaked ahead of the first major update, 1.1, making it the most anticipated region to come. If rumors are to be believed, part of Inazuma is coming to 1.6.

Inazuma is divided into three areas, two islands, and the main town of Inazuma, which will rival Mondstadt and Liyue. Both islands are supposed to arrive in 1.6, so this will give you two additional areas to explore. We don't know how big they will be.

Ludi Harpastum was created in commemoration of how Barbatos, the Anemo Archon, taught his people to brew wine and live freely. It was a festival for everyone.

The Ludi Harpastum is an annual festival that will take place in Mondstadt. The event in question is known to have lasted 15 days of games, laughter and joy.


The games champion will choose a young girl, who will then throw the Harpastum – a round ball of red cloth – into the crowd. Whoever catches or picks it up first will be blessed with fortune and happiness all year round.


Leakers don't know if this event or Inazuma will appear first, as miHoYo has yet to decide. Klee is supposed to have a banner raise.

Dendro is the last elemental in Genshin Impact. No character can use this nature-based power. Only a few enemies in the game can use it, and they are rare.

If the speculation is correct, Dendro won't appear until 1.9 at the earliest. Dendro is bound to the Rumor Zone, the Chasm, and that won't come until Inazuma is fully freed, and then some.

This is all information about 1.6 so far, but the update is still a long way off. We'll update this article if anything more becomes available.

In the meantime, why not check out our Genshin Impact Codes for free rewards! And looking for When is the next banner?