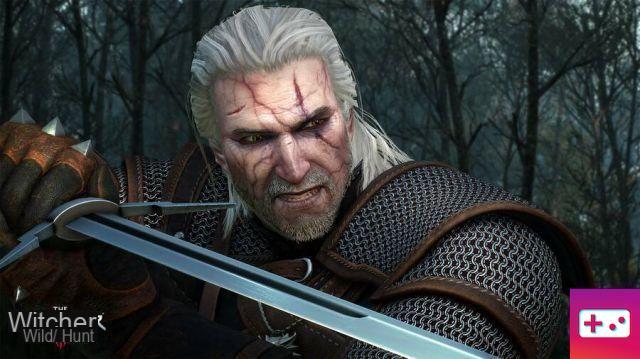 What are the best character builds in The Witcher 3: Wild Hunt - Blood and Wine? CD Projekt RED's huge expansion lets you turn Geralt into a nigh-unstoppable force with the right combinations of mutations and skills. Only available through the massive Blood and Wine expansion, Mutations are acquired through a quest you can take on relatively early during your time in Toussaint. Once you gain access to them, you'll soon discover that, while specific in their use, mutations can greatly enhance the effectiveness of the grizzled Witcher.

As such, we've put together this guide on how best to combine these new mutations with existing skills and abilities - hopefully it'll help you create character builds that will be extremely useful during your adventures. adventures. But first, we need to cover some of the basics. 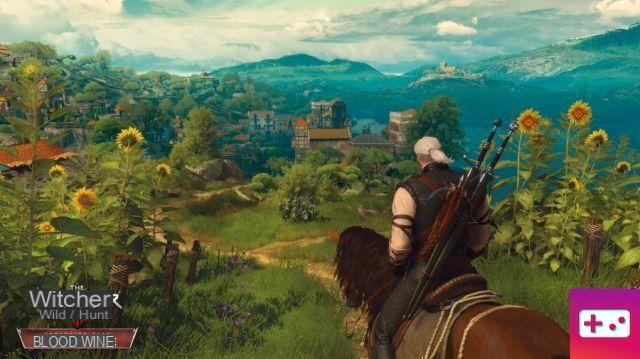 How to unlock mutations in The Witcher 3: Wild Hunt – Blood and Wine?

As mentioned, you need to complete a certain quest in order to access the new mutation menu. The side quest in, uh, the question is named "Turn and Face the Strange", and you're sure to come across it at some point. As you travel through Toussaint, you will encounter a messenger who has a letter for you. This triggers a cutscene which, in turn, triggers the quest. Once you're on the trail, the quest itself isn't too difficult - though it's reasonably long - and upon completion you'll be able to use Mutations.

However, it's worth pointing out that the game doesn't actually tell you that you've accessed Mutations after completing the quest - the Mutations menu just appears as part of the character tab. You can see this by pressing triangle on the skill screen.

How do mutations work in The Witcher 3: Wild Hunt - Blood and Wine?

Mutations add a whole new layer to Geralt's development, so the new system is something you'll need to wrap your head around. Mutations add to existing skills and abilities – the ones you buy with skill points when you level up. There are 12 mutations in all.

You can only have one mutation active at a time, and like existing skills and abilities, each mutation belongs to a different skill category: there are red (combat), blue (signs), green (alchemy ) and yellow (general) mutations. Depending on the mutation you have equipped at any given time, you will be able to equip up to four additional skills or abilities of the same color.

However, unlocking each mutation is quite an expensive undertaking. You'll need a lot more mutagens and plenty of unused skill points to unlock everything, but, as noted, mutations can be incredibly powerful tools, so in the end, they're well worth the effort.

With that out of the way, let's take a look at the mutations themselves. 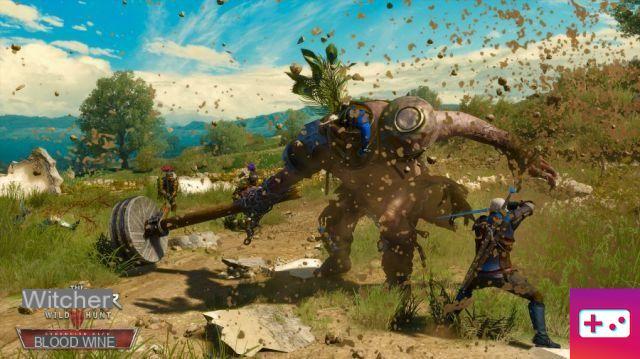 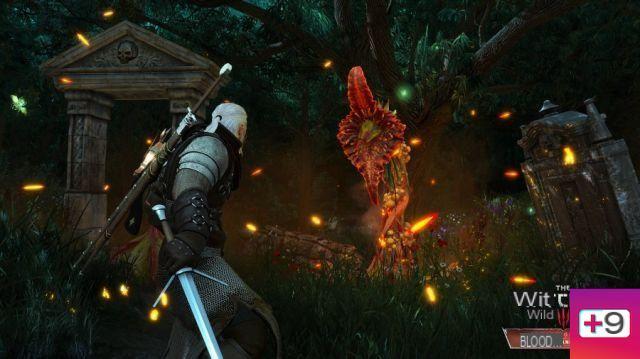 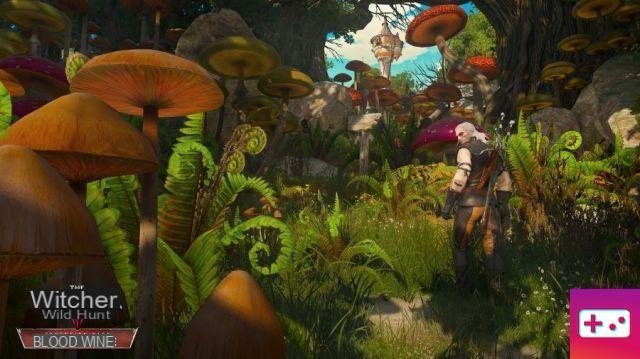 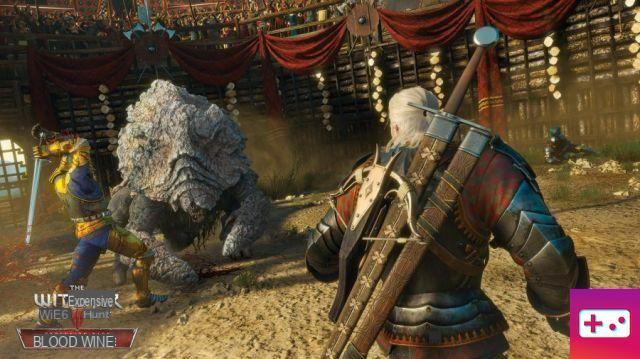 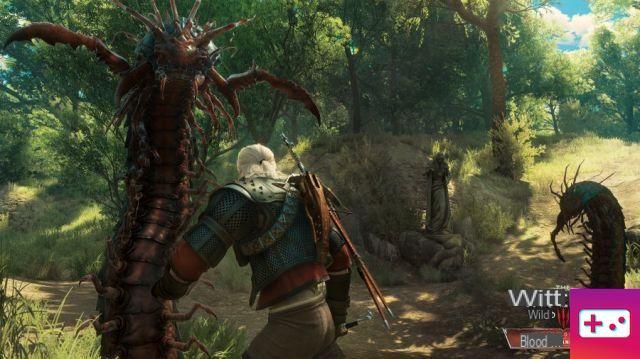 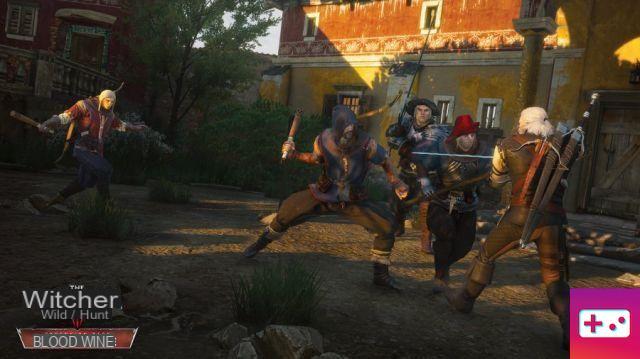 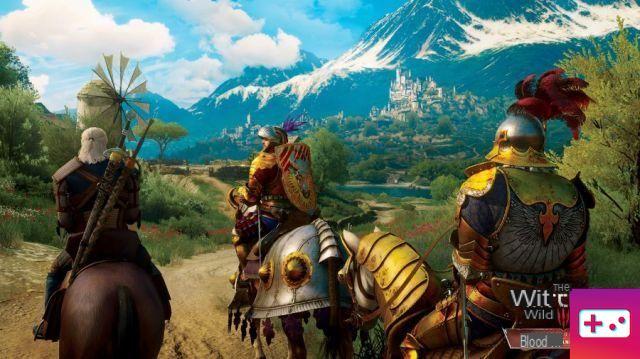 Alright, now it's time to get really corny. Below, we've created a base character build for each new mutation found in Blood and Wine. These builds are by no means definitive, but we've done our best to match each mutation with the skills and abilities that benefit from it. Heck, we even came up with some pretty cool names for each build.

So, without further ado, let's get stuck in. 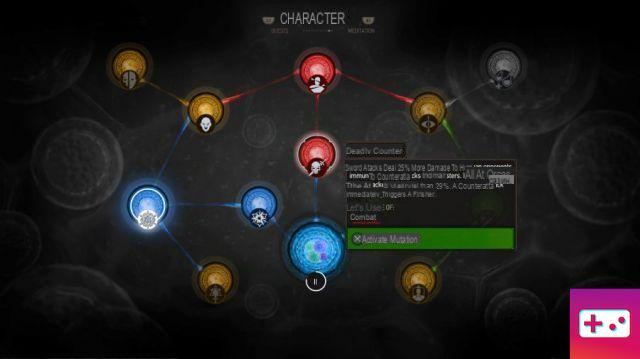 The Death Counter is an easy to use mutation. Its effect is pretty basic, and for the purposes of this build, we'll be focusing on increasing the raw damage it gives to sword attacks. The 25% increase is quite a boost when you combine it with skills that already improve the damage you do to your blades. Counterattack also enters the equation for enemies that are below 25% health.

In short, if you want to be as deadly as possible with your swords, then Deadly Counter is a great fit that's relatively easy to bolster with various skills. 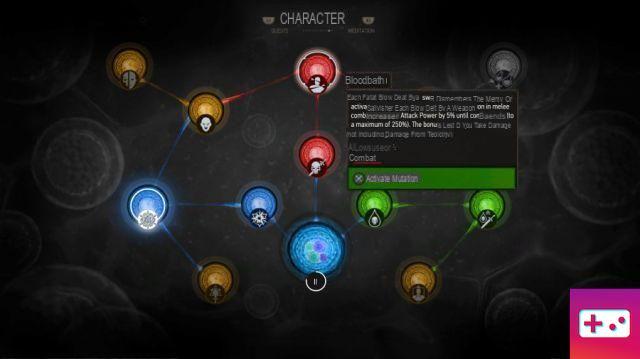 Whatis this build on?

Bloodbath steadily increases your damage output each time you hit an enemy, so this build is all about building momentum and not taking damage. Against enemies with large health bars, this mutation, combined with skills that compliment it, gives you the ability to do big damage if you can keep up your combo.

Skills that work well with Bloodbath: 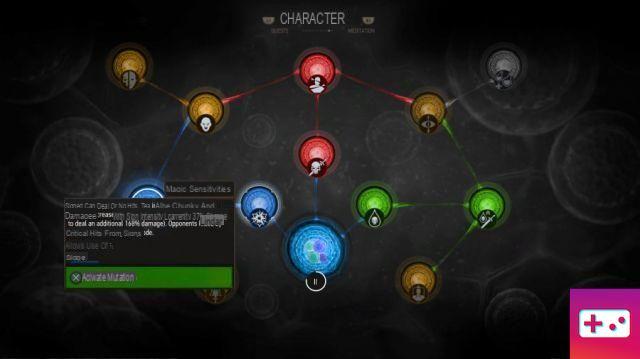 What is this build about?

With this build, your offensive signs become much deadlier. Magical Sensitivity applies a critical chance to your signs, and the chance can be increased by boosting your sign's intensity. As such, this build focuses on skills that improve the effectiveness of your signs and increase their intensity. 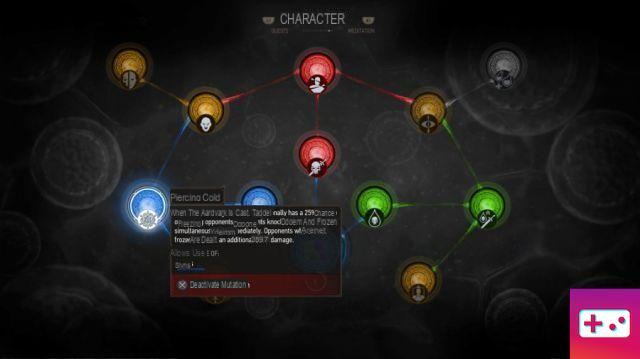 This build focuses on Piercing Cold's incredibly useful freezing abilities. As such, this is to reinforce Geralt's Aard sign. Sounds pretty basic, but this build can easily be expanded to suit your own fighting style while still making Aard arguably your most formidable weapon. 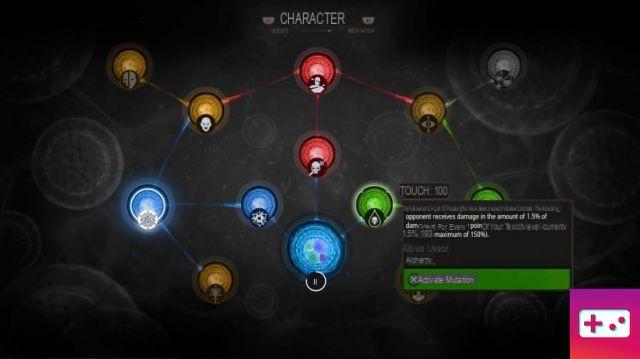 This build is all about making sure Geralt has a high but safe toxicity level as often as possible so he can damage his enemies even when they lay into him. That said, you don't want to get hit by your opponents in the first place, so think of this build as another you can develop depending on your fighting style. Damaging enemies with your own blood is a nice bonus to have, but you definitely shouldn't rely on it as your primary means of dealing damage. 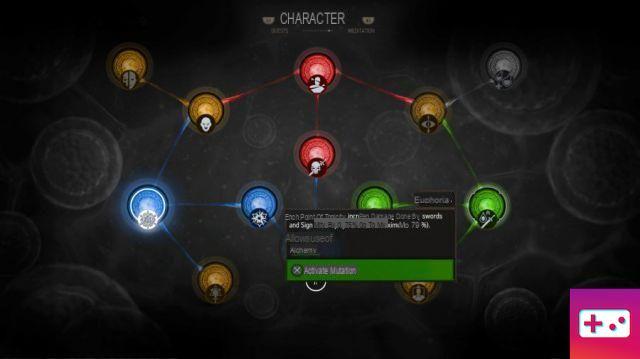 Much like the Toxic Blood build above, this one is all about keeping you (safely) replenished with potions. Only this time you keep your toxicity high to maximize your damage and sign intensity. As such, you may also want to invest in skills that help increase your damage output across the board.

Skills that work well with Euphoria: 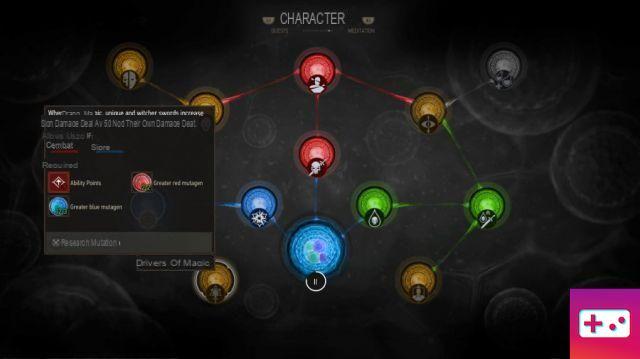 What is this to construct?

Conductors of Magic is an easy to use mutation, as many skills can be tied to it. The main factors here are your equipped blades: equip yourself with swords that offer high attack power and watch your damage signs go up. With that in mind, it's probably best to focus on signs of damage for this build.

Skills that work well with Conductors of Magic: 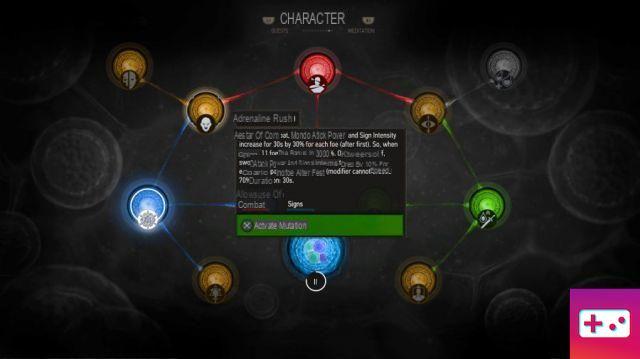 Adrenaline Rush is a risky mutation, but if you know what you're doing, fights can be over in a flash. This build is all about doing heavy damage as quickly as possible, before the negative effects of the mutation kick in after 30 seconds. Brave or stupid? Probably a bit of both. 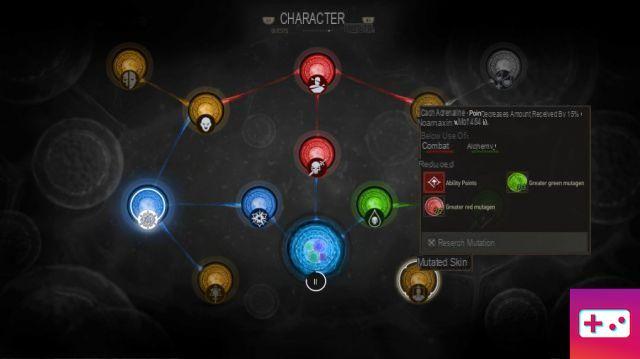 The mutated skin can turn Geralt into something of a walking tank as long as you can efficiently generate adrenaline points. This build focuses on survivability paired with skills that help you rack up adrenaline so you always take minimal damage. 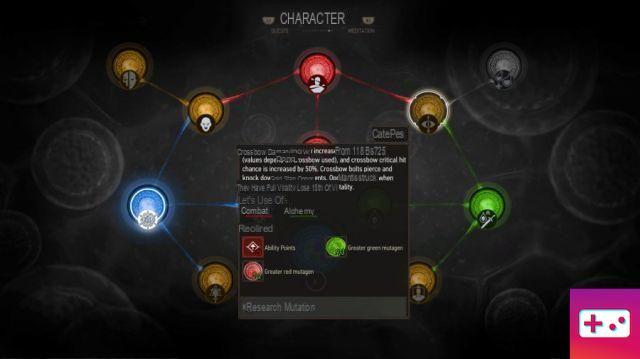 Cat Eyes essentially makes the crossbow a viable option for dealing extra damage in combat, while granting it some very useful perks. This build focuses on maxing out the crossbow, turning Geralt into a dangerous long-range attacker. 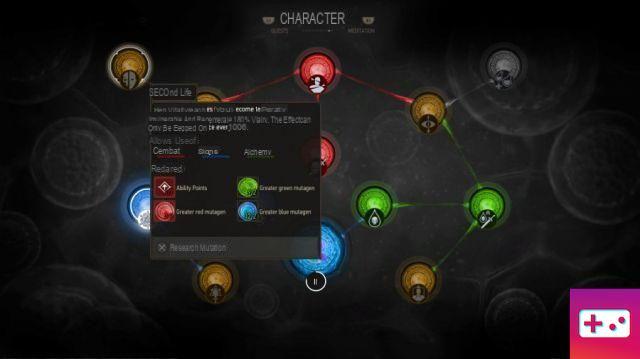 It's going to be tough trying to build an entire playstyle around a mutation that allows Geralt to revive every 180 seconds, but it's definitely a perk that syncs well with skills that focus on survival. Again, this is another version that you can easily adapt in different forms depending on how you play. Whatever you decide, however, there's no doubt that having at least one extra life is pretty huge. 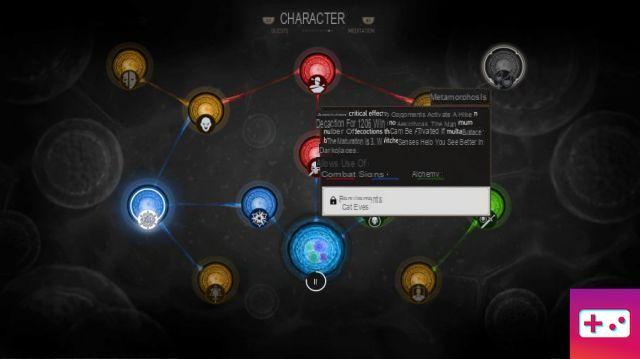 Transfiguration is a bit of a gamble as you don't know which decoction is going to activate, but that shouldn't matter too much when you potentially have three at once. Non-toxic decoctions only activate when you successfully apply a critical effect to an enemy – in other words, you need to make them burn or bleed, or maybe even poison them. As such, this build is all about using skills that apply those effects.

Skills that work well with shapeshifting:

add a comment of Guide: The Witcher 3: Blood and Wine Mutation Character Builds