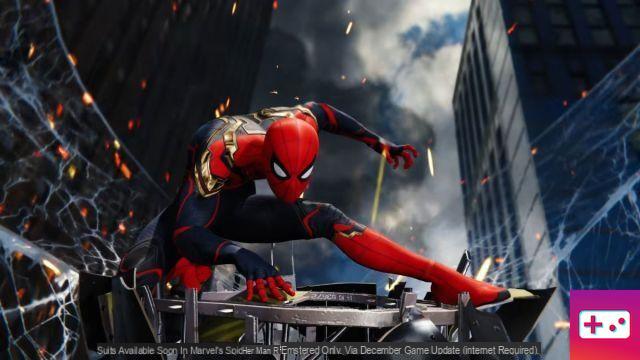 With the hype levels for Spider-Man's next live-action movie No Way Home off the charts, it's time for some new ties. As part of the ties, Fortnite received a Spider-Man skin. Now Insomniac Games' critically acclaimed Spider-Man video game for PlayStation will be getting two new costumes based on the outfits Peter Parker will wear in No Way Home. Both suits will arrive exclusively in Marvel's Spider-Man Remastered on December 10. a full week until No Way Home's December 17 release date.

Both suits will most likely be part of a free update to the game. Unfortunately, it's only available for the PlayStation 5 versions of Spider-Man Remastered. PlayStation 4 versions of the game will not receive the costumes. In a response on Twitter, Insomniac Games justifies their decision not to update the PS4 version of the game by saying that it has become technically more complex to keep updating and maintaining PS4 HDD streaming performance. Marvel's Spider-Man Remastered is only available on PS5 in Marvel's Spider-Man: Miles Morales Ultimate Edition.

To ensure fans continue to enjoy Marvel's Spider-Man (PS4) at its peak performance, we've made the difficult decision to release these new suits for Marvel's Spider-Man Remastered (PS5) where our PS5 engine allows us to update update the game without compromising player experience.

To get the costumes, players will need to download the latest version of the game to their PS5 on December 10. The PS5 should have an auto-download feature, which should automatically download all new updates as long as the player is connected to the internet. Otherwise, a player will have to press the start button while highlighting the game in the PlayStation menu. There will be an option to check for updates.

The two suits are called the Integrated Suit and the Black and Gold Suit. The built-in suit does not match all of Peter's suits he wears in the Marvel Cinematic Universe. He has a similar black and red color scheme to his outfit in Far From Home, and he also has the golden spider logo as seen on his Iron-Spider outfit. The Black and Gold is a black version of Peter's typical costume, with gold straps covering it.

Audio Video How to Get Both No Way Home Suits in Marvel's Spider-Man
How to get the Pikachu and Eevee themed masks in Pokémon: Legends Arceus ❯

Is there character creation in Torchlight Infinite?

What are Secrets and how do I unlock them in Hot Wheels Unleashed?