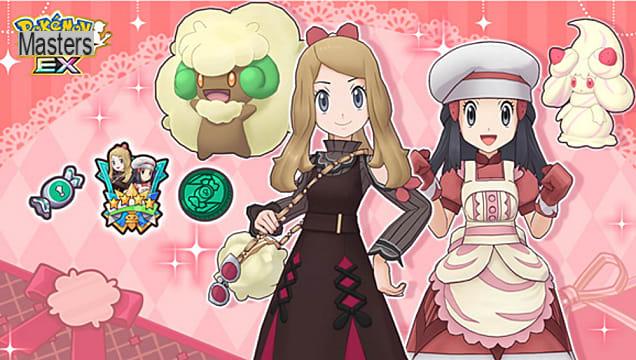 Valentine's Day is right around the corner, and in Pokemon Masters EX, that means it's time for treats and new Sync Pairs during the Palentine's Day event.

Palentine's Day is when Pasio trainers give away desserts to their human and Pokémon friends in the Baking Buddies story event until February 18. in special dessert-themed outfits.

Completing the event rewards players with foods such as Gooey Chocolate, Fresh Berries, Fluffy Frosting, and more. Logging in daily for 13 consecutive days during the event also earns players 1000 Gems to spend on Sync Pairs.

Speaking of Sync Pairs, Pokemon Masters' Palentines Day event adds two new Sync Pairs to the Sync Pair Spotlight mechanic. The first, available from now until February 18, is Serena and Whimsicott, with Stun Spore as Whimsicott's signature. The second, live from January 31 to February 18, is Dawn and Alcremie, with a focus on charm and fake tears.

Both new Sync Pairs feature their respective characters' dessert outfits and can both achieve a 6-Star EX Potential rating.