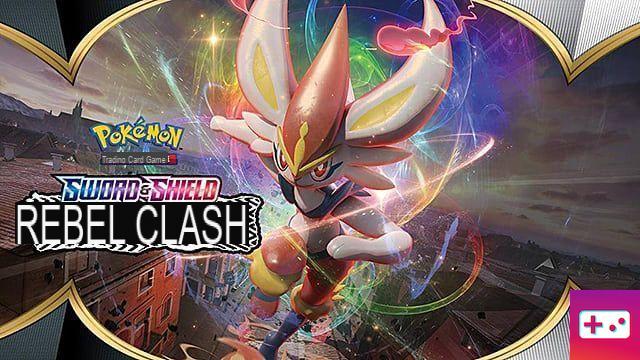 After the huge success of the Sword and Shield expansion, The Pokemon Company's Pokemon TCG has a brand new follow-up: Rebel Clash.

These Pokemon come in basic V forms, which can evolve into Pokemon VMAX which are some of the most overpowered cards to date.

This guide features 15 of the best Rebel Clash cards, including Pokémon and support and energy cards.

The new and evolved Dragapult VMAX will be a serious threat this season. It is a Psychic Pokemon that has the ability Max Phantom, which spreads five damage counters over the opponent's Pokemon.

Spread damage has always been super powerful in many high-level decks, but this looks like the best spread damage Pokemon yet.

Also, it has a huge HP pool and enough attack power to deal with almost any type of threat on the table.

This fluffy Pokemon is very similar to one of the most powerful cards in the Guardians Rising expansion: Tapu Lele GX. Much like Tapu Lele, this Pokemon searches for support cards, but instead of looking through your deck, it brings back supports from your discard pile using the Happy Match ability.

This is definitely going to be a new staple V card in the Rebel Clash meta, as supporter recovery effects have always been heavily used in archetypes.

Speaking of supporter cards, the best supporter in Rebel Clash is clearly boss orders. This is actually a working reprint of the Lysander card from the Flashfire expansion, and just like Lysander, this card will play until it turns.


It's also worth noting that veteran players refer to the Gusts effect as Boss Orders, which comes from the Gust of Wind card that was printed in the base set.

This Pokémon's G-Max Riot ability begs to be played with any poison effect. There are currently two such maps as standard: Koga's Trap and Garbodor. Koga's Trap is a proponent of the Unbroken Bonds expansion, which not only poisons an opponent's Active Pokemon, but also confuses them.

There's also Rebel Clash's Garbodor which can inflict poison, but since there's a lot of support for supporter-type cards, it seems players will mostly associate Toxtricity VMAX with Koga's Trap after all.

Tool Scrapper is a reprint of a high value item card from the Dragons Exalted expansion. A lot of players wanted this card back, and here it is.

There are some obnoxiously powerful tool cards in the meta right now, so it's a relief to finally see a solid tool drop in the meta. Decks that run Air Ballon and various Amulet Tool cards will finally encounter their enemy in the form of Tool Scrapper.

Much like Counter Energy from Crimson Invasion, this card was designed to balance all non-V and non-GX Pokemon.

This means The Pokemon Company is really pushing extremely powerful decks like Welder out of the meta, not to mention the latest fan move.

Twin Energy will play a crucial role in balancing the standard meta by opening the doors to more creative decks.

This little monster is the real deal when it comes to damage. For only 1 energy, it can inflict 60 points of damage. Inteleon VMAX can easily KO any of the evolving base Pokémon.

For 3 energy, it deals 160 damage, which isn't groundbreaking, but still incredibly strong.

Besides the damage potential, it has a lot of HP, which makes Inteleon VMAX a great all-around card.

The counterattack here really sells Cinderace VMAX. You can take damage, then heal, and still deal 30 plus the amount it was damaged for.

The second attack can KO Zacian V, and that's something you should never forget - and it only costs 3 energy.

Since Fire Energy gets a lot of support in Rebel Clash, this makes Cinderace VMAX one of the best VMAX Pokemon in the new set.

Obviously, this highly specialized item card won't see play in V or GX decks. However, all other archetypes will definitely find it useful, such as Galarian Zigzagoon and Inteleon with Shady Dealings.

It also works great with Shaymin EX, Ultra Necrozma who can now avoid Shock Lock with the help of Scoop Up Net, and Wall/Stall players will love this card too.

All types of energy cards are valuable in all formats. Many higher level decks also use lightning energy, and now they can draw two additional cards using Speed ​​Lightning Energy, which is surprisingly strong.

This card will appear in the Turbo PikaRom and Toxtricity VMAX lists. Surely all lightning-based decks would want multiple copies of this in their main rosters.

Psychic decks will embrace this card, and with the help of Spell Tag, this can put up six damage counters instead of two. You can also distribute this damage however you want, which is a fantastic tool to have.

Horror Psychic Energy will see play in Malamar and Mew3 decks. This map will definitely be a great addition to their bag of tricks.

This is a somewhat upgraded version of Team Aqua's secret base from the Double Crisis set.

It will be a good addition to Cinccino decks using Boss Orders which can put certain Pokemon into active spot and stall them afterwards.

But there are other ways to use it. For example, Krookodile decks can really make him useful with all their energy acceleration techniques. It's just a great way to overcompensate your opponent on every active Pokémon in play.

Ability lockers are among the most feared cards in Pokemon TCG. Galarian Weezing is a new enemy that many decks will hate to play against, especially the much-hyped ADP Zacian.

The Severe Poison option is also very good, as it can put four damage counters on any active Pokemon.

This one will work well no matter what stage you're in, as it works similarly to Roseanne's Research of Secret Wonders set, which happened to be a proponent of universal research.

But of course, playing it as soon as possible is much better, especially if you're playing on a combo deck.

Spiritbomb is a new player in the infamous ADP Zacian deck. It can potentially deal a lot of damage with five counters in combination with Hustle Belt and Altered Creation GX.

If you manage to attach a large charm to it, the damage will increase up to 280 points, which is good for good.

That's a huge swing for a priced forward like Spiritomb. So don't look past its hidden potential.

These are the best cards from the latest Pokemon TCG Rebel Clash expansion. For more, check out the other Pokemon articles here.