Ratchet & Clank: Rift Apart – how to get high zurpstones with Trudi 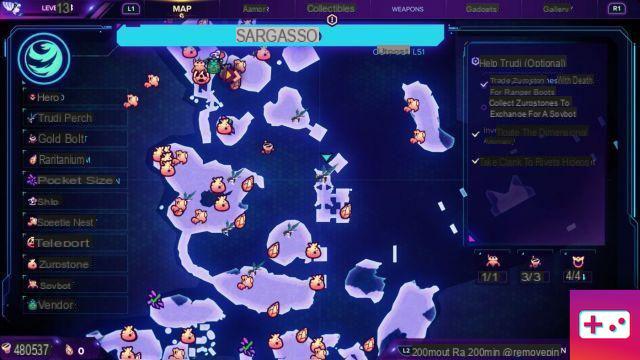 After collecting 30 zurpstones, Mort will grant access to Trudi, the friendly dragon who lets Rivert ride on his back. While this allows you to collect zurpstones faster, high zurpstones may seem tempting to collect as you can fly through the air. This is precisely where the confusion lies.

In short, avoid these inaccessible zurpstones until you have collected 45 in total.

Death grants Trudi access to 30 zurpstones, but the game doesn't do a great job of telling you to collect the ground zurpstones first. Before the fireball ability is unlocked, Trudi is more useful for traversing the map faster, as opposed to traveling on foot. There are certain places on the map where she can perch (press the O button), allowing you to drop down and explore the surroundings.

Many of these zurpstones are grouped together in the same area, which will help you collect a bunch of zurpstones in a short time. But these clustered locations often result in defeating a Grunthor, so be prepared to take them out using every weapon in your arsenal.

The game teaches you Trudi's commands pretty quickly, so here's a breakdown of her abilities:


We were one of the players tempted by high zurpstones before Mort informed Rivet of Trudi's fireball attack, and wondered why we couldn't get them back. So just be aware that you can't walk up zurpstones high up, nor pick them up until Trudi's fireball ability is unlocked at 45 zurpstones.

add a comment of Ratchet & Clank: Rift Apart – how to get high zurpstones with Trudi