Read the Arrow's message at a Keeper's Outpost, Arrow Quest

Author and references
Reading the Arrow's message at a Guardian's Outpost is one of the Arrow's special challenges, which features the character of Jonesy. We show you its location on our map. In addition to the traditional challenges, which are available every week, Epic Games has set up special challenges for certain characters in Fortnite. This is the case of Jonesy, who is also at the heart of a series of quests, the Challenges of the Arrow. These, in addition to exploring the lore of the battle royale, allow players to recover good rewards, whether XP or skins. To do this, you will have to validate the challenge asking you to read the Arrow's message at a Guardian's outpost.

Read the Arrow's message at a Guardian's outpost

As you may have guessed, you will have to go to one of the six guardian outposts, which we find on the island. We advise you to land there directly and equip yourself, as soon as possible, with a weapon, since the enemies will probably be numerous, without forgetting the guardian of the outpost, who is quite strong.

On site, you will have to go to the top of the tower, on which you will find a beacon (see header image) which is simply the message to read. Just interact with it to validate the challenge and be able to move on to the next step. If you have the possibility, land directly on the platform at the top of the tower, you will save time and limit the possibilities of getting killed.

You can also go there later in the game, but there is no guarantee that one of the towers is still in the safe zone.

Below are all six Guardian Outpost locations in Fortnite, in case you don't know where we find them. 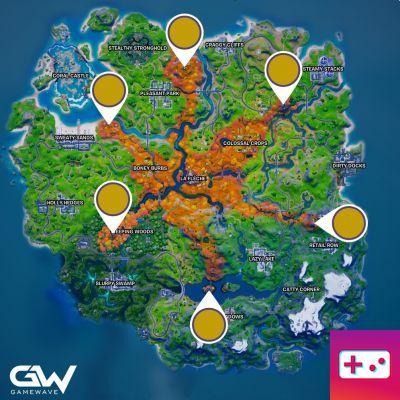 add a comment of Read the Arrow's message at a Keeper's Outpost, Arrow Quest