Sea of ​​Thieves: Captains of the Damned Journals Guide

Sea of ​​Thieves' A Pirate's Life expansion has been making waves (I admit it, pun intended). In the third Tall Tale of the new expansion, Captains of the Damned, players will learn that Captain Jack Sparrow is quite a popular man. If you're wondering where to find all ten journals from this fantastic episode, read on to see exactly where they are.

Saving Jack is one thing, but collecting these journals will earn you accolades, and who can resist that? Here's where to find all ten Captains of the Damned journals.

Sea of ​​​​Thieves: Captains of the Damned Journals – Blue Bayou

Once you've crossed the Sea of ​​the Damned and arrived at Blue Bayou, this slum of still, eerily calm waters will host the first three Damned Logs you need to locate.

Captains of the Damned Diary #1

This journal can be found right after you board your rowboat. Follow the path in front of you until you come to an open area.

Far to the south you will see your ship where you left it. But first, turn and head north (remember to always use your compass when we provide landmarks) and head to a small, well-lit shack where a banjo (no Kazooie) sits near it. a rocking chair. 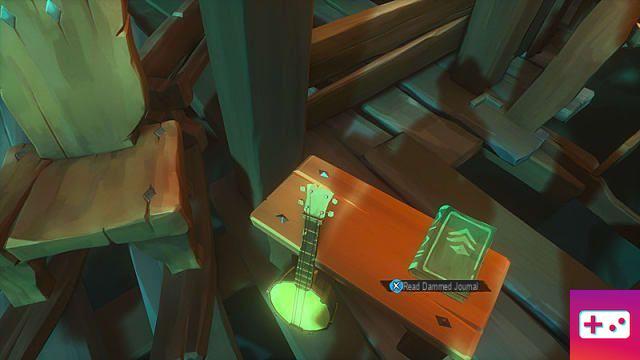 Pay no attention to the chair swinging on its own (swallow!) and instead look to the right of the banjo to find your first log.

Captains of the Damned Diary #2

The second Damned Journal is also in this Bayou.

From your first log, swim or row east. When you see a mast with a white flag hanging over the water as an accidental backdrop, head to land behind it, still heading east.


When you get to the other side of the landmass, look to your left and approach the cabin. 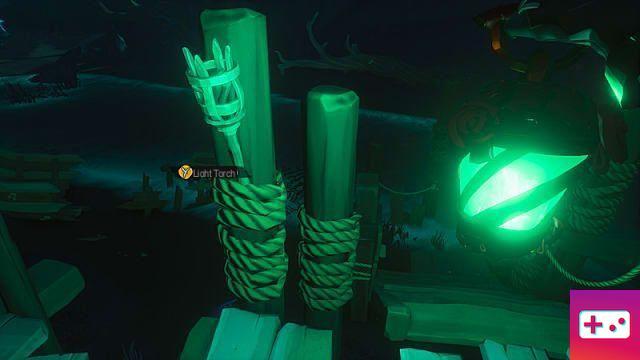 Unlike most huts in this area, the stairs leading to this one remain intact. Climb them and light the lantern with your Flame of Souls, then follow the path of the self-lit lanterns until it brings you to the edge of the water.

You'll probably already see the journal glowing on the ocean floor, but if you haven't, dive straight into it and look where you'll find a rowboat wreck housing the second journal.

Captains of the Damned Diary #3

This is the last journal you'll find in the Bayou.

Go back up and catch your breath, then swim northeast until you see a rock formation with two cages hanging from the edge and above the water. You'll want to climb on land and then approach these cages from the edge of the rock. 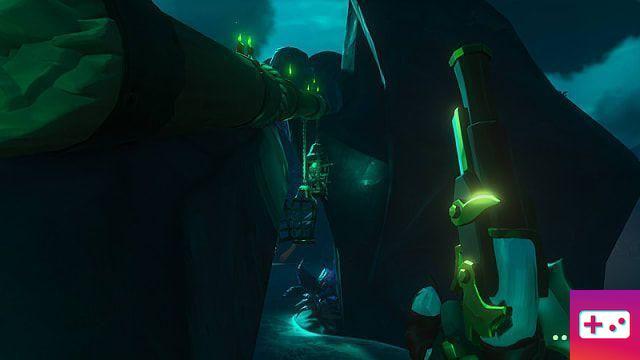 Light the lantern, then pull the threadbare rope that hangs one of the cages dangerously above the water. It will break apart and the cage and its contents will fall into the water below. Jump in, open the cage, and the third log in this area is yours. 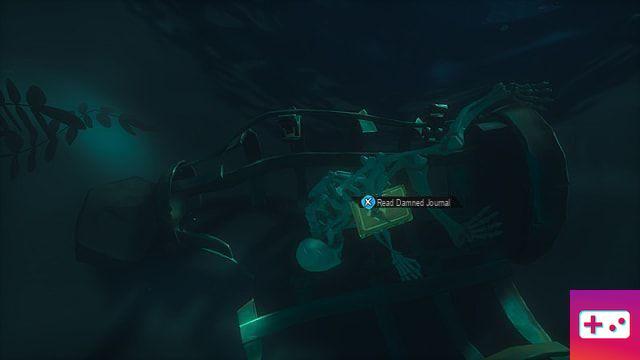 Captains of the Damned Journals — Fort of Lost Souls

Once you have these three, you can follow the storyline as needed. You'll then come to the Fort of Lost Souls, and here you'll need to take the time to read two more journals - the final two of the full set of five damned journals.

Captains of the Damned Diary #4

Once you've passed through the huge iron door, head to the wall on your right and light the lantern in front of the prison cell. It's for the final journal, but as you'll see it's kinda helpful if you prepare it yourself in advance.

Then go to the large well in the center with the braziers surrounding it. Light them all and the small well door will open. Jump in and fall into the well. Swim to the bottom and grab the hook near the skeleton. 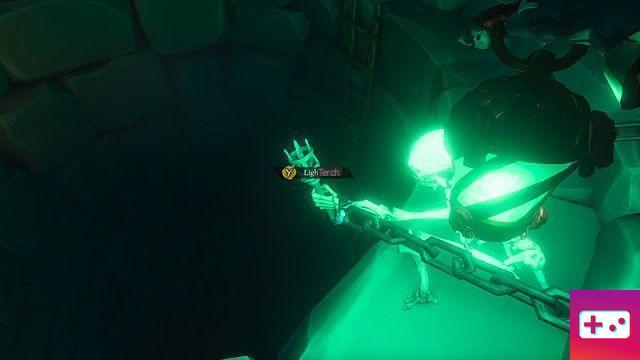 Then, pull up and momentarily drop the hook, leaving it where you won't lose it (the constant glow when unequipped should help a lot).

Among the skeletons left sitting near the edge of the well, look for the one with the unlit lantern. Light it up with yours and you'll see the next log appear just across the well. 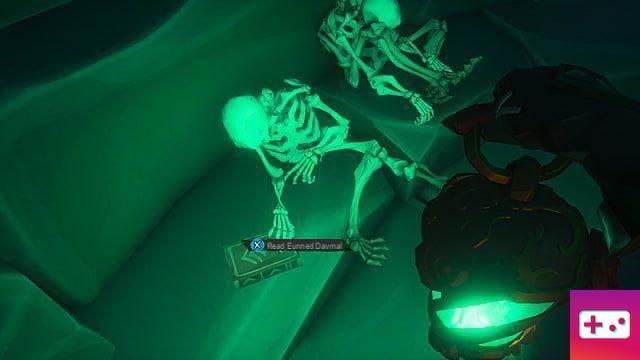 Captains of the Damned Diary #5

The fifth Captains of the Damned Journal is in that jail cell you lit before.

Take the hook, plunge back into the water of the well. About halfway the length of the shaft you will see a road to the outside.

Swim to find yourself on the ground in front of a locked door. Use the hook to enter, then go to the far left corner and climb the ladder. 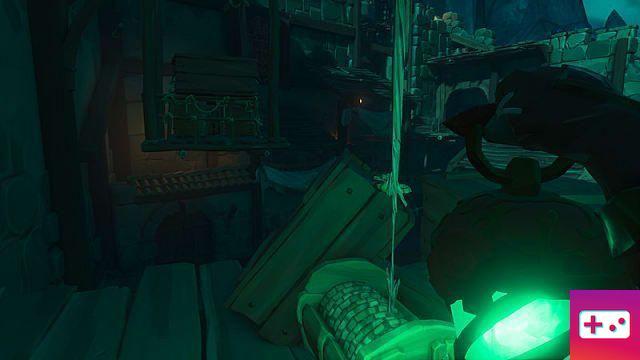 Cut or pull the rope that is nearly torn in half, which will drop a pallet of crates that now serves as a platform.


Jump on the roof, go down to the stairs, then head to the roof above the prison. You'll see a hole you can fall through, so do so and grab that last log sitting at your feet. 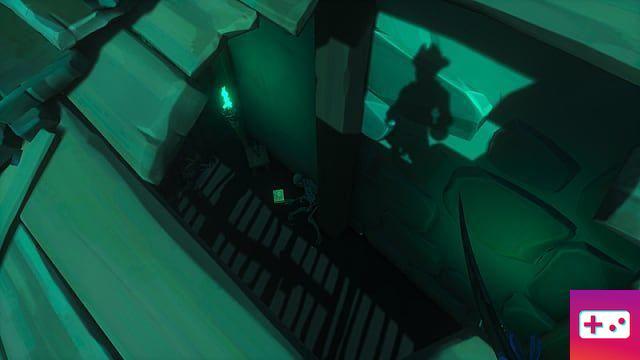 The Captains of the Damned Diaries — Isla Tesoro

Normally five logs would make a full set in a Tall Tale, but Captains of the Damned has double the amount. Fortunately, the other five are all in one place. Continue through the story as needed. Collecting these five will award the Forgotten Memories commendation.

The first journal can be found just inside the clothing store, which you'll pass through on your story quest anyway.

Right after entering the store, look to your left to find the newspaper placed on a stool. 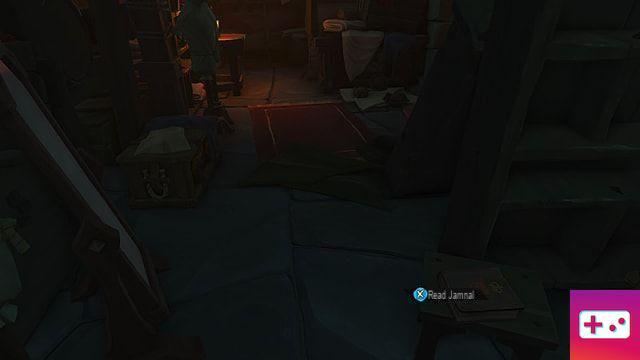 This one is further down your initially linear path. You will pass barrels on your right with Xs painted on them.

Shortly after, look in a crate outside where you'll find the second journal. 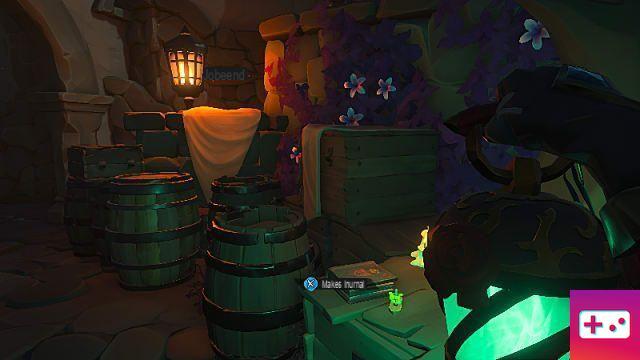 This journal is on your way again, although you can get it at either of the following two points. Here's how we got it: When you get to the part of town where the ghosts are having an auction, look along the water's edge to find a rowboat, currently occupied by a pair of skellies.

They don't mind sharing, so hop on and paddle through the channel until you come to a ghostly scene where a trio of wraiths engage in a firefight.

A few crates from where the solo ghost fights for his afterlife, you'll find the third journal. 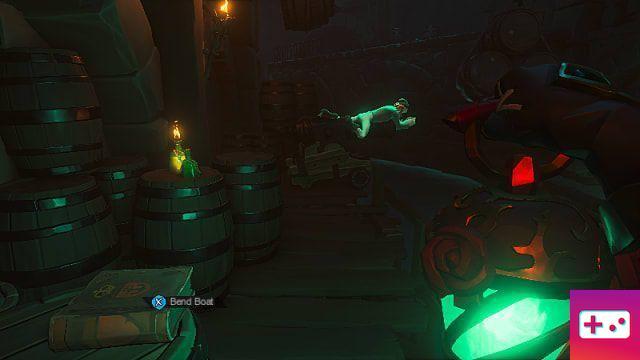 You can pick up this journal after Jack Sparrow goes through another mage iron door.

You're supposed to give chase, but there's no rush. Instead, head up the nearby stairs and down the outer hallway until you come to an open space where you'll see the journal left on a stone structure not far from a pair of ghosts. 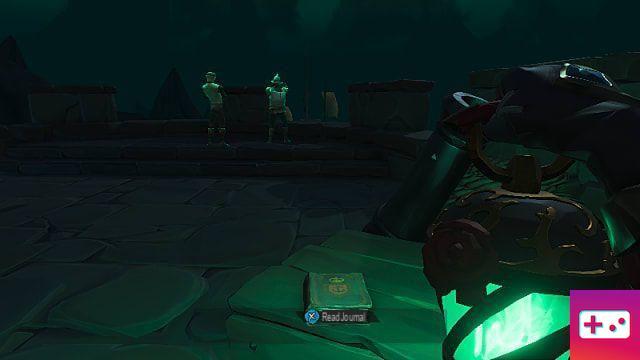 This is the final journal for the entire Tall Tale set, and you can find it after certain story beats have played out.

Shortly after, you fight other ghosts in an outdoor alley. Once defeated, you continue as you were going and drop down to a lower roof.

There you will find your fifth journal in the city, which is also your tenth and final of the Captains of the Damned Tall Tale. 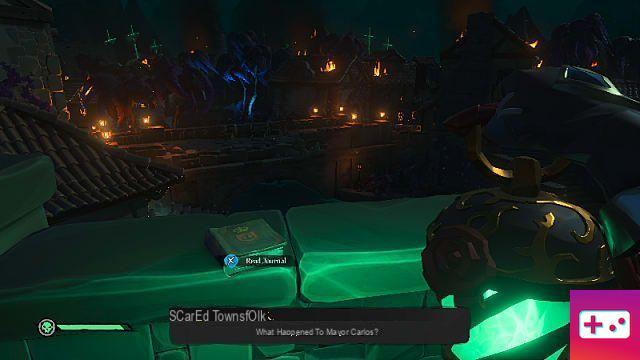 And that's how you get all the Captains of the Damned Tall Tale journals in Sea of ​​Thieves, and it's one hell of a journey to get them all. There's a lot more to see and do in this Tall Tale, though. Check out our Sea of ​​Thieves guides for more information on how to make the most of your time with A Pirate's Life.

add a comment of Sea of ​​Thieves: Captains of the Damned Journals Guide