Solar Ash offers something few games dare to deliver: gameplay focused on a simple toolset that never expands, where progression isn't about gear or skills or levels beyond a slight increase in health. In this latest from Heart Machine, the studio behind Hyper Light Drifter, there are just a few basic mechanics: skating, climbing, jumping, grappling, and a basic three-hit combo attack.

Solar Ash plays like some of the biggest games of the last decade, namely Breath of the Wild and Super Mario Odyssey. Rather than giving you the ability to modify or improve upon these basic systems, Solar Ash instead asks you to use them in new and evolving ways. Each new area forces you to rethink the way you play without adding anything to the core abilities suite.

Combat follows a similar pattern, with bosses and enemies requiring more precision, new strategies, or additional mobility techniques to conquer properly. Defeating bosses is also the main way to advance the story, which won't win any prizes but has some fun twists. Secondary content adds additional flavor, bringing a more personal narrative to a tale with otherwise galactic repercussions.

In short, Solar Ash is a complete package, with stellar gameplay, a well-told story, and a realized world ready to be explored. Its flaws are few, well overshadowed by the enjoyment of everything else.

Solar Ash takes place inside a supermassive black hole called Ultravoid. You play as Rei, a voidwalker who uses the power of God and magic space technology from the anime to skate through the gravity well, where the fragments of other consumed planets exist as ruins. His job is to activate a large obelisk called Starseed which will stabilize the Ultravoid and render it unable to consume its home planet.

To allow the Starseed to do the impossible, Rei must remove six anomalous energy signatures called Remnants so the device can properly calibrate. Along the way, Rei will uncover the fate of the other Voidwalkers, learn the truth about her mission, and have a chance to assist the few remaining beings in the Ultravoid.

The gameplay is simple. Rei can skate on most surfaces (but not on buildings), grind on railings, climb odd-looking vases, and use energy blades to attack her enemies. Traversal is smooth and seamless, with the push of a button you float through the world.

You can boost every few seconds for a bit more momentum, extend your jumps, or safely avoid danger. You can also briefly slow down time to increase your grapple distance or gauge the success of a jump.

These mechanics allow for plenty of gameplay variations, as you see in Shrines or Moon Challenges in Breath of the Wild or Mario Odyssey, respectively. She "advances" only by adding unique points to her health pool or by equipping different Voidrunner suits, which grant passive bonuses. 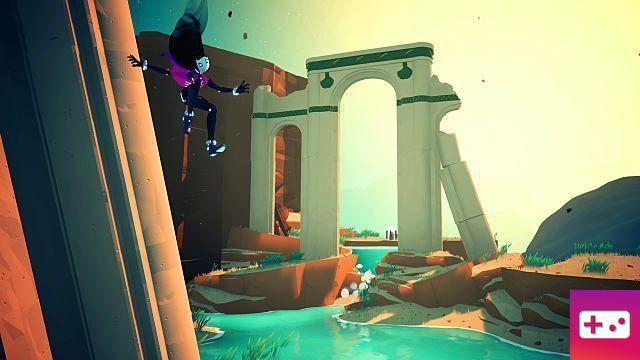 Progress is therefore almost solely yours. The early areas are simple, devoid of the gravity and perspective distortion that plagues later levels. This is also true for bosses. Late game bosses move you up, down, diagonal, and back. The first boss is a straight line.

New areas introduce new mechanics, then ask you to make different choices with your moves. The new systems are also not unique to their area of ​​introduction. You'll use them again and again as you go deeper into the Ultravoid. 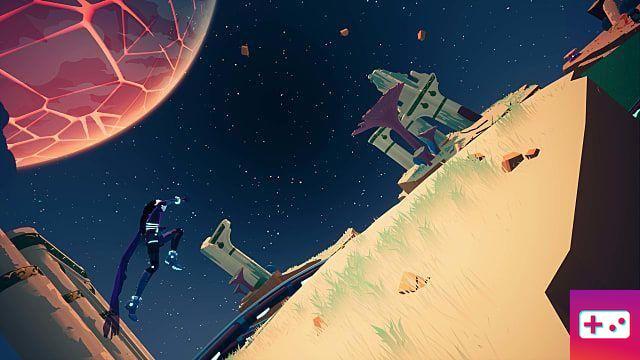 The problems do not come from the level or the design of the system. It's the camera that gets in the way. As a third-person platformer, Solar Ash's camera does its best to stay behind Rei when she's not actively being moved. Combine its fast movement speed and the ever-changing terrain and actually moving through the world can become a chore. You'll execute a jump sequence perfectly, only to have a piece of geometry fill half your screen, sending you back to a checkpoint.

Camera failures aren't Solar Ash's only weak point. The story won't impress anyone familiar with sci-fi tropes. You're likely to predict most plot twists, and even the ones that got me were more of a "Hey, that's great" than "Holy shit, that was amazing!" He can also be somewhat valuable at times, relying heavily on ideas like "lost hope" and camaraderie. Thankfully, those moments are relatively rare and are mostly absent from secondary content, where the best writing is.

Solar Ash also has some of the best worldbuilding I've seen in a long time. Its slightly cliched themes aside, understanding the Ultravoid and the cultures within it is a fascinating ride. Discovering the secrets of the world reminds me of Dark Souls and the best Souls-likes, where every corner could hide a new clue to the story. 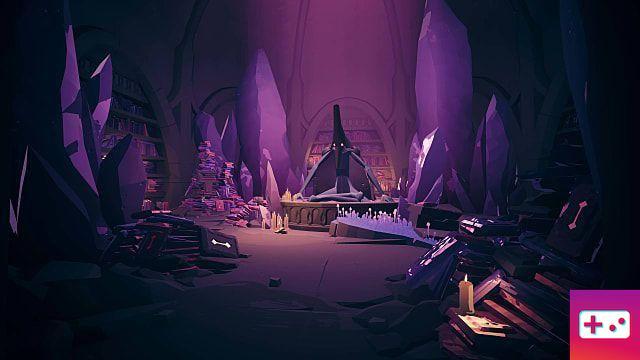 The few characters you meet are also quite well done. Their fights deal with the same themes present throughout the game – hope, death, loss – but have real human qualities. They don't need to be human to want purpose, to know that their loved ones are safe, or to hope that their actions are not in vain. Sometimes these side stories are silly, other times they're incredibly sad, but they're all well worth seeking out.

If I could ask Solar Ash for anything more, it would be more gameplay story integration. We're only told a little about how the Voidrunner Boots enable skating through cosmic structures, and Rei's various abilities aren't explained either. Indeed, the fact that we are essentially rollerblading to save an entire planet is never addressed, which amounts to “because video games”. This disparity is by no means a compromise, but given the polishing of much of the rest of the game, this extra step would have taken Solar Ash to another level. 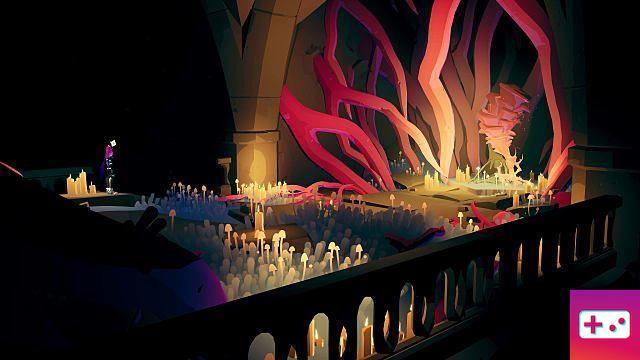 Solar Ash is a triumph, especially considering the size of the Heart Machine team. There aren't many games like this, and its inspirations are some of the biggest in the game. It's much easier to fail to learn from the best, and Solar Ash almost never fails.

Its issues plague even the most beloved titles, and the more I thought about Solar Ash, the more I realized how much I enjoyed every second of it. I hope you too.

[Note: Annapurna Interactive provided the copy of Solar Ash used for this review.]

add a comment of Solar Ash review: Skating through the stars