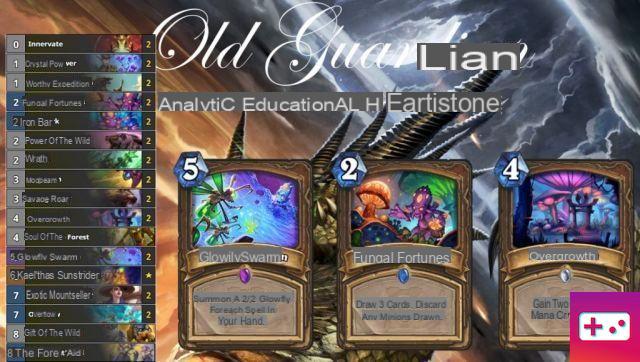 Our Heartstone Spell Druid Deck List guide takes a look at this brand new archetype from the Ashes of Outland expansion! We looked at the best list for the game as well as mulligans, strategy and game combinations, and card replacements!

Mage isn't the only class that has an incentive not to run minions in a deck! Druid also got cards in Ashes of Outland that encourage you to fill your deck with spells. This is a fairly new archetype for the class, but not completely unfamiliar to it. Malygos and Miracle Druid had similar aspects, with the deck mostly performing spells and only a few minions. That will be the problem with this archetype, how many minions do you need to run? Well, we haven't got it all figured out yet, but we'll be sure to keep updating this guide with more powerful versions in the future.

We have a preview of this game with a version by Brian Kibler! We'll update this list with more refined lists as the meta begins to take shape.

This deck, while largely spell-based, is really a token deck in disguise. You have a lot of cards that spawn multiple minions on the board, so we'll be playing around quite often. This game also currently contains some fairly powerful high-end cards that we strive to access through our ramp options.

At the start of the game, we are mainly looking to protect our face from too much damage and increase our mana pool. We can also hope to gather additional resources by getting a big draw from Fungal Fortunes. We have removal tools, things like Wrath, Beees!!!, and the new Bogbeam can handle threats. We're hoping to trigger that 0-mana part of Bogbeam, but you won't always have that luxury.

We should start switching things up in the middle of the game, due to cards like Glowfly Swarm which should set us up with a pretty powerful board. We can also follow this later with The Forest's Aid. Overflow also acts as a way to heal and get plenty of resources to work with if we had to spend a lot to keep the board clear.

Archspore Msshi'fn is the primary druid card and also works as a very good early game minion. The main card is a 10/9 mana 9/9 with Taunt which has a choice that reads, "Summon a 9/9 Fungal Giant with Taunt; or Rush." It's a pretty powerful late game trick that gives us protection or the ability to remove something problematic. Remember, once this goes into your deck, you'll need to be careful with Fungal Fortunes as you could easily throw this minion with it!


The endgame is where we can do some really crazy things! Kael'thas Sunstrider can give us a bit of a swing, and pairs really well with Innervate and The Coin if you can swing it. This third spell can then be an overrun or forest aid hitting all on the same turn.

Ysera, Unleashed can be pretty crazy in this game due to our ability to draw meaningfully through Fungal Fortunes and Overflow. A 10 turn with a Ysiel Windsinger can also lead to great possibilities.

Our final endgame swing comes in the form of King Phaoris. Due to our ability to draw a number of cards and the fact that our deck has high cost spells, we can really create a devastating board via this card!

Audio Video Spell Druid Deck Guide – Ashes of Outland
Marvel's Spider-Man: All Suits and How to Unlock Them ❯