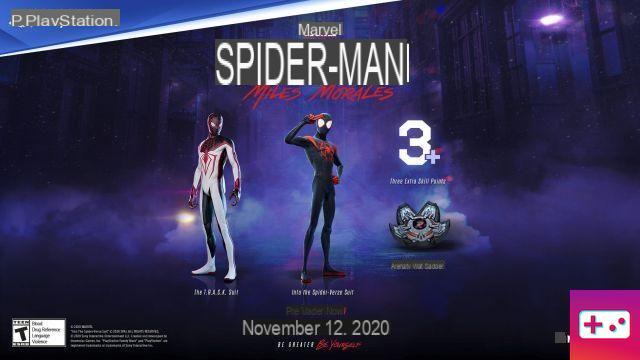 Who's up for web-slinging action all over New York, but as lead character Miles Morales instead of Peter Parker? That's right, the star of Spider-Man: Into The Spider-Verse is the lead in the latest Insomniac Spider-Man: Miles Morales game. Begin where the latest DLC ends, as Miles Morales is bitten by a genetically enhanced spider, very close to the original Spider-Man story.

Here are the following pre-order bonuses you get:

With these extra suits, gear, and skill points, it won't take long for you to beat Spider-Man: Miles Morales!


In the standard edition, you get the full game and nothing else. However, if you pre-ordered it, you will also get the pre-order bonus. Or you can buy the Spider-Man: Miles Morales Ultimate Edition, and you get Spider-Man Remastered!


If you buy the PlayStation 4 version, you can only buy the Standard Edition!