Talk to the Jonesy, Arrow Quest

Author and references
Talking to the Jonesys is one of the special challenges for the Arrow, which highlights the character of Jonesy. We show you its location on our map. In addition to the traditional challenges, which are available every week, Epic Games has implemented on Fortnite special challenges, concerning certain characters. This is the case of Jonesy, who is also at the heart of a series of quests, the Challenges of the Arrow. These, in addition to exploring the lore of the battle royale, allow players to recover good rewards, whether XP or skins. To do this, you will have to validate the challenge asking you to talk to the Jonesys.

Many NPCs have been present on the battle royale island for many weeks and, among them, we find several different Jonesys. At least nine can be found in certain places of Fortnite and, good news, most only have one spawn, which will allow you to complete the challenge quickly, without relying on randomness. 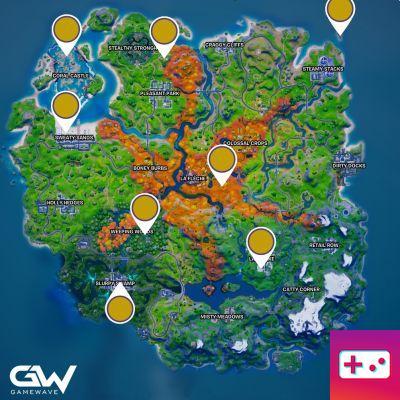 As you can see on the map of the Jonesy's locations above, the latter are grouped mostly on the west of the map, so this is where we advise you to go. Know that you have to talk to five Jonesy to validate the challenge, which can therefore be done in a single game, with a bit of luck, if you focus on this one. To complete a step, just talk to it. Do not hesitate to use a car to get from one point to another, to go faster.

You can also go to a rat race so as not to waste time, since if you die, you can still continue your quest.

Note that on our map we have only marked Jonesy locations which are fixed.
Audio Video Talk to the Jonesy, Arrow Quest
Speak with characters to unmask an infiltrator, challenge season 7 ❯

add a comment of Talk to the Jonesy, Arrow Quest