Author and references
Like every Thursday, new challenges are offered to players in possession of the Battle Pass in order to obtain even more rewards. For this eighth week week of season 9, one of them asks to visit several clocks to then receive 5 stars. On this Thursday, a new week begins in Fortnite, and who says new week also means new challenges! As usual, players who have previously purchased the Battle Pass for this ninth season must complete a series of challenges in order to obtain stars and thus collect various rewards of all kinds. Battle pass, which as a reminder, is available in the game store for 950 V-Bucks, or 9,49 euros.

So, for this week 8, players with the Battle Pass will have to visit several clocks. Three clocks seem to be arranged on the map, the first being located southwest of Neo Tilted, of course, given the futuristic aspect of the city, this clock will not have the expected rendering. Perhaps you have already visited it, since chip 2, linked to loading screen #6, could be there. If you haven't picked it up yet, now is the perfect time to do so. The second clock, rather sundial, composed of car wrecks , will be in the southwest of the desert area. You will find the third and final clock in an unexpected place. Indeed, this one resides southwest of Junk Junction, but will not be in working order, since it is placed on the ground in the middle of dozens of debris.

In addition, once this challenge has been validated, for those who have not yet had the opportunity to complete the others, you can complete them by following our instructions.

In order not to waste time in your research, we have listed the different locations of these clocks on the map below. 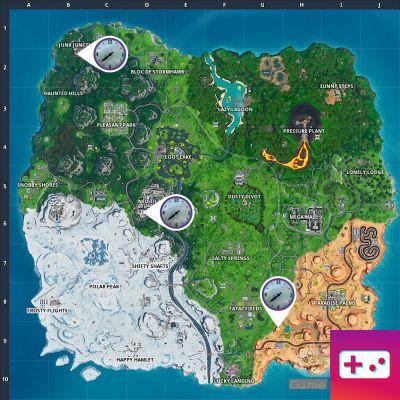