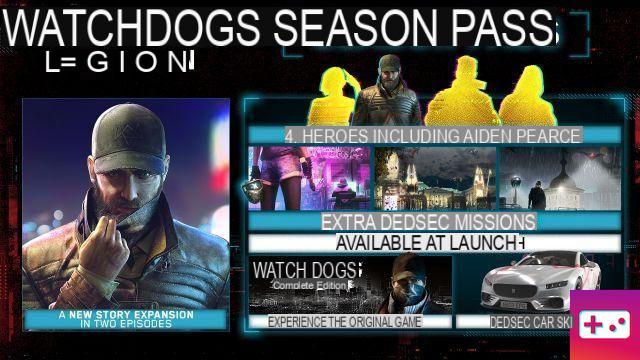 Most games have a Season Pass these days; these are just ways to extend the life of games, because not everything can be done before the game is released. A Season Pass is rarely expensive, because no one wants to buy a full game for twice, or even sometimes a third. It entirely depends on whether the Season Pass is worth the extra money, so let's see what's coming in the Watch Dogs: Legion Season Pass.

If you purchase the Watch Dogs: Legion Season Pass, you'll get access to post-launch DLC. You'll get two new post-game story expansions, 4 unique heroes, 3 Dedsec missions, a Dedsec car skin, and Watch Dogs: Complete Edition. Depending on the version you buy, the Season Pass may already be included, for example in the Gold, Ultimate and Collectors editions.

The first expansion is called Bloodlines, and it will give characters specific gameplay abilities; however, not much else is known about this DLC. We will definitely hear more information in a few months in the life of Watch Dogs: Legion.

It looks like the Season Pass price hasn't been announced yet, as you can't purchase the Season Pass separately from Ubisoft itself at this time. Thanks to companies such as Amazon, it seems possible, but it only seems to be for the Xbox Season Pass at the moment. If you're looking for the other versions that offer the included Season Pass - Gold, Ultimate, and Collectors, you can purchase those versions from the Ubisoft store.

Not even the Xbox Store, PlayStation Store, or Epic Games Store have the Season Pass to purchase separately. No doubt that will change soon when Watch Dogs: Legion releases, but the DLC isn't expected to release until 2021 anyway.

If you purchase the Season Pass, you get access to four additional heroes that you can play as during the main campaign, as well as a new campaign called Bloodlines, which will give all 4 characters new gameplay abilities.

The first character, which everyone has probably heard of, is Aiden Pierce. He was the main protagonist of the first two Watch Dogs titles, and it's nice to see him making an appearance in the third!

Masked hacker Wrench played as a side character in Watch Dogs 2, and he returns to be part of Watch Dogs: Legion: Bloodlines. Wrench was actually playable in the final act of Watch Dogs 2, but we're wondering what skills he'll be given in this new DLC expansion.


Mina, a subject of transhuman experiments possessing the power of mind control, which could massively open up gameplay. Use it to enter new safe areas, or better yet, use it to disturb everyone.

Darcy is a member of the Assassin Order. This means that the two franchises, Watch Dogs and Assassin's Creed, are in the same universe; that's awesome! We have no idea what skills he'll be given, as there's a lack of hay in near-future London to dive into, but we do know that Assassins are excellent climbers! We can't wait to see what abilities these 4 will possess in Bloodlines.