The original Windjammers is probably the most SNK sports game of all time. "Flying Disc Sport" is a mash-up of tennis (or, let's be honest, Pong) except with a very frisbee object and is structured like a classic arcade one-on-one fighting game. Each of the six characters has their own arenas and even fighting game-like special move sets.

Windjammers are fun stuff, too, even for those of us who might never have dabbled in more traditional sports games. It managed to generate enough goodwill and nostalgia over the years to both be ported to modern systems and spawn a sequel. Windjammers 2 may have flown nearly 20 years later, but it sticks like glue to the source material.

The new game has 10 competing characters, along with new stages and moves to go along with them. The core gameplay involves throwing, lobbing and tossing the disc over a net to score a goal into your opponent's scoring zones. Depending on the arena, scoring areas are usually divided into three segments worth either three or five points (the five-point area is usually a smaller sized goal). An opponent missing a shot is worth two points and the first player to win two of the three sets wins the match.

As you play, your Power Gauge grows, allowing for super moves like fiery spiraling disc shots or blazing discs along suddenly swerving paths. When the disc is thrown at you, a target will appear on the ground to see where it will land and standing there just before grabbing and returning the shot can also result in a special move. All of these powerful moves have a lot more power than normal shots, but can still be intercepted and returned (which also results in a super shot).

Most of these moves are performed by pressing a direction and the throw, slap, or lob buttons. You can add a curve to normal shots with half-circle movements when throwing the disc. There are a surprising amount of layers to the gameplay and learning to perform basic and special moves is only half the battle. Understanding how to counter enemy shots is a little more complicated. 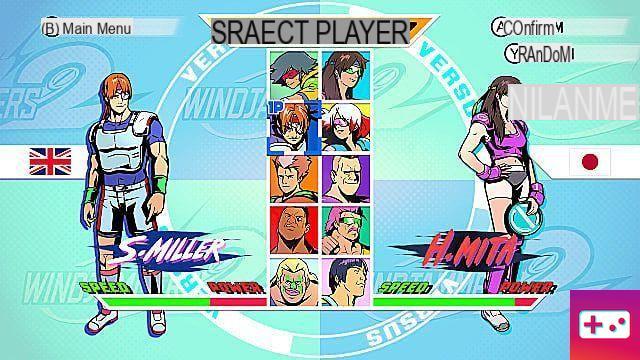 The single-player arcade mode spells out how random much of the action can be. Sometimes the movement of the disc (especially with certain special moves) seems almost random. Just like the original, the dash and throw are the same button, which can sometimes lead to annoying mistakes, such as dashing when you wanted to catch and throw the disc back.

The hand-drawn 2D graphics are crisp and colorful, with barely a pixelated character in sight. The HD widescreen presentation looks great, but the visuals still cater to Windjammers' retro roots. The audio (with an over-excited announcer, goofy electronic battle music, and fast-paced character soundbites) seems perfectly in keeping with the Neo Geo arcade heritage.

Windjammers 2 includes online and local multiplayer modes. Online, you can select ranked, quick, or friend matches. Online matches were smooth and lag-free, but there's not much in the way of advanced customization or tournaments. You choose your character, select an arena and go. Unless you specifically choose to play with a friend, the game randomly connects you with other players. 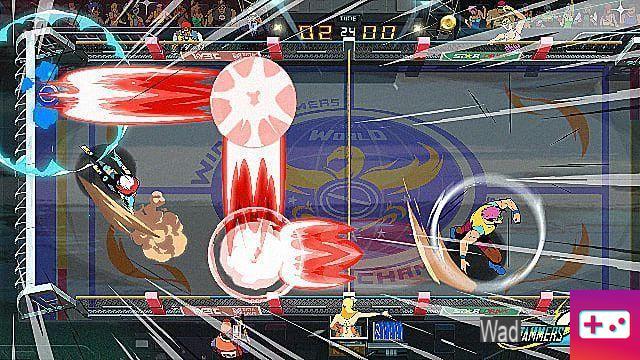 Windjammers 2 feels less like a sequel than a remaster of the original. Despite the new graphical overhaul and increased roster characters, it's still basically the same game. That's not a bad thing if you enjoyed the original, but in the end, we can't help to think that this sequel could have been bolder and opened up the game to something bigger.

[Note: Dotemu provided the copy of Windjammers 2 used for this review.]