Author and references
Find in this guide the locations of all the X4-Aquilon, the planes in Fortnite, to quickly and simply validate the challenge asking you to travel 5000 m in an X4-Aquilon. In addition to the weekly challenges, Epic Games has made a habit of launching temporary events, especially to celebrate certain things, such as the end of the year. This is how the Operation Snowfall event was born, which promises to offer many rewards to players, but also XP. One of the challenges will ask you to travel 5000 m in an X4-Aquilon, since the planes have indeed made their return.

Location of X4-Aquilon (planes) in Fortnite

Chances are you already know where to find these planes, since they were reintroduced a few days ago already. However, even if you're not a fan of this vehicle, you're still going to have to find one and travel 5000 meters, or destroy opposing structures, to validate the challenge and walk away with the rewards.

Know that if the card has about fifteen X4-Aquilon and are often grouped in threes. They are still close to Neigionnaire's outposts, which have been at the heart of several challenges already. So you just have to go to one of these places to get your hands on a plane, hoping that no other player has passed before you.

When you are in a X4-Aquilon, you just have to cover these 5000 meters by doing laps of the map. If you want to succeed in the challenge asking you to inflict damage on opposing structures, which comes out this December 23, you just have to observe carefully and shoot when you see constructions.

Two fairly simple challenges, which will be validated very quickly. You can use the map below to easily and quickly locate thelocation of X4-Wildlight in Fortnite. 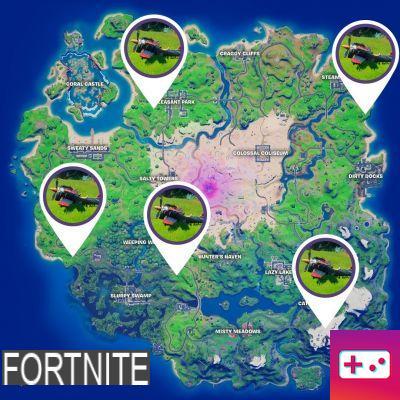 Audio Video X4-Aquilon, where to find them in Fortnite?
Xenoblade Chronicles 2 Trust: how to increase it ❯

add a comment of X4-Aquilon, where to find them in Fortnite?