Author and references
For its fourth anniversary, Fortnite's battle royale is hosting a small party, allowing players to unlock some rewards by completing several challenges. Like every year since its launch in 2017, Epic Games will celebrate the anniversary of the in-game battle royale, with a series of challenges, but also a more festive battle bus than usual. For this fourth anniversary (yes, already), three special challenges are planned. They can be validated on the battlefield between September 24 and 28, by all players, whether or not they have purchased the famous Battle Pass.

As always, we're dealing with challenges that are relatively easy. You will have no trouble validating them, especially if it is not the first time that you are celebrating a birthday. Fortnite, since it is often the same ones that come back over the years.

If you focus on these challenges, you should quickly validate them, especially since there are only three of them. The first might take you a bit longer though, given that you need three different parts to complete.

You can see the list of challenges below and, if needed, a link to a more advanced guide for some tips. 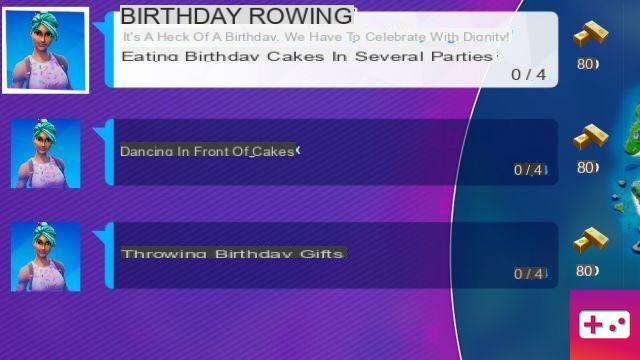 For the rewards, we will be able to collect the 4-year-old baker back accessory, the Cake hammer pickaxe and the 4-year-old emoticon.
Audio Video Fortnite: 2021 Anniversary Challenge List
Fortnite: List of Notable Locations ❯