Author and references
Players who have purchased the Season 9 Battle Pass will need to search for Chip 53 in an abandoned Mountain Villain Lair in order to complete the hidden picture in the Decryption challenge. Since May 9, when Season 9 kicked off, a new type of challenge has appeared alongside those offered for free or in the Battle Pass. Effectively, all players who have purchased the Battle Pass for this new season have access to a challenge called Decryption in which an image is hidden by 100 computer chips. To discover it, they will therefore have to go in search of these chips by completing various challenges such as reaching a specific level, obtaining a certain number of EXP, etc.

To get chip 53, you will have to surrender east of Snobby Shores, and more precisely on the mountain which is located there, on which is perched a large building, half integrated into the latter. On the ground floor of the building you will find two platforms, the disco ball on one, the chip on the other.

To complete the challenge, you will need another player. One of the two will have to go on a platform and dance, the second will do the same on the other platform. If both players dance long enough, the disco ball will be lifted, allowing once at the top, to unlock the chip.

When the chip is collected, it will then be necessary to go to the Challenges tab then Decryption and press box 53 to discover a piece of this hidden image. 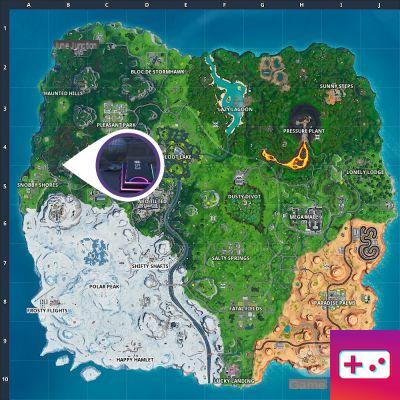 add a comment of Fortnite: Chip 53: Participate in lifting the disco ball in an abandoned mountain villain's lair, Decryption Challenge