Fortnite: Minty Pickaxe, how to get it?

Author and references
While many cosmetics are already present in Fortnite's Battle Royale mode, the Minty pickaxe, by its full name Merry Mint, or Festive Candy in French, seems to be particularly expected and prized by many players, but how can we be sure to get it back? Update of 07/11/2019: Epic Games has formalized, through the French Fortnite Twitter account, that the codes for the Festive Candy pickaxe, otherwise known as Minty, will be available from today in all Micromania in France, nothing being planned for our Belgian neighbours.


The Bonbon Festif pickaxe (yes, it's called that in French, dear friends of Micromania!) is available from today in Micromania stores.

We don't have any code to distribute - it's useless to ask :D https://t.co/sUx5PZtJyb 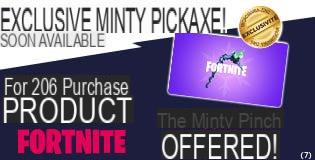 The information has been validated and confirmed through the Micromania newsletter. The Minty pickaxe will indeed be exclusive to Micromania on the French market. Any purchase of €20 of Fortnite products, from November 11 to December 31, 2019, will allow you to recover a Fortnite pickaxe card, while stocks last. Do not hesitate to ask the advisers present in the store to find out if you are eligible to receive this famous pickaxe.

Over the past few days, thousands of players have challenged themselves to be the happy owners of the Minty pickaxe, which seems to have become the absolute Holy Grail. Of course, given the enthusiasm generated by the latter, many opportunists see it as a temporary source of income, thereby creating multiple scams of all kinds... It is important to specify, for the youngest among you, that certain dishonest people will take advantage of the situation, and particularly of this general runaway, to profit pecuniary from it. The various Discord servers, promising you mountains and wonders in exchange for the invitation of your contacts, in particular the famous pickaxe, or even the more or less attractive prices are surely nothing but pure scams.

How to get the Minty pickaxe?

The company in charge of the development of Fortnite generates, as you might expect, a good part of its income thanks to the various derivative products linked to the franchise. To continue this momentum, Epic Games announced a few days ago that many new Fortnite products, in addition to prepaid V-bucks cards of different values, will be available in various stores for the holiday season. 'year. At certain retailers in France, whose names have not yet been disclosed, any purchase of an officially licensed Fortnite product will include a gift code to unlock the delectable Minty Pickaxe for free, in the limit of the available stock.

Some of these codes seem to have been distributed well before the authorized date at Gamestop stores in the United States, making this pickaxe much rarer than it will be in a few weeks. In France, stores such as Micromania (whose parent company is Gamestop) or even La Fnac should be able to provide these famous codes in exchange for any purchase of an officially licensed item or a V-bucks card. So don't hesitate to ask the sellers present in these stores to find out whether or not you will be eligible, depending on your purchases, to receive a code for the long-awaited Festive Candy pickaxe.
Audio Video Fortnite: Minty Pickaxe, how to get it?
Fortnite: NPC 13, Cube Assassin, where to find it? ❯

add a comment of Fortnite: Minty Pickaxe, how to get it?