Fortnite: Street Shadow Ruby Pack, how to get it?

Author and references
Epic Games is offering all players the Shadow of the Streets pack, which allows you to unlock several skins by completing a few fairly simple challenges. We explain how to unlock it. For a short month, the players of Fortnite will be able to unlock a free pack, which allows you to recover, without spending a penny, four skins, including a special outfit for Ruby. It's rare enough to highlight it, but all players are eligible, whether they've purchased the Battle Pass or not.

How do I get the Street Shadow Ruby Pack?

Before you start, you should know that this pack can only be obtained through the PC version of Fortnite. BUT, it can be usable on all platforms once it has been picked up. If you can, just install Fortnite on a PC and run the game to get it. No need to start a game.

To retrieve it, you can go to the game store. Otherwise, a screen will announce the availability of the pack and you just have to click on it to go to the dedicated page. Even if you are an occasional player, we advise you to collect it, since it costs nothing.

Once unlocked, you will then have four challenges to complete to unlock each of the outfits, which are: 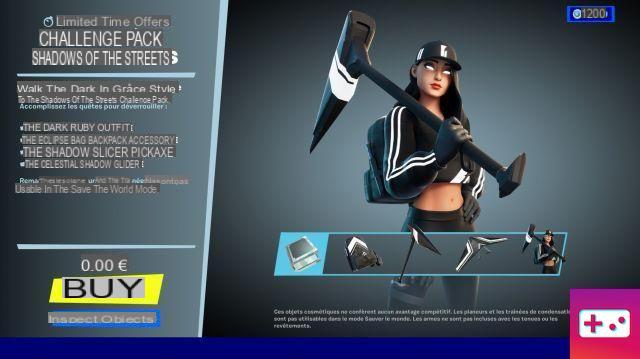 You can find more information about the challenges in this special guide.

add a comment of Fortnite: Street Shadow Ruby Pack, how to get it?