Author and references
As part of the fourth week of Fortnite Chapter 1 Season 2, players will need to complete the Shipyard Trade mission by inflicting damage on opponents by shooting gas pumps. A lot of things changed when Fortnite Chapter 2 was set up. The players therefore had to adapt and set off to discover a completely new island, although places known from the previous one are still present, such as Salty Springs, Pleasant Park or Retail Row. For this first season, players are asked to complete eleven objectives per mission. This week, it's the Trade at the Shipyard mission to be carried out, including, among other things, the objective of inflicting damage on opponents by shooting at gas pumps.

To complete this challenge, players are asked to travel to gas stations to blow up gas pumps there to inflict damage on opponents. There are roughly five such stations scattered around the island, the first is west of Holly Hedges, the second is slightly north of Salty Springs, the third and fourth are south and east respectively. east of Frenzy Farm while the fifth is south of Craggy Cliffs and east of Pleasant Park. so all you have to do is get there, find a target there, bait it near the desired station and then shoot the pump closest to the enemy for them to take damage.

In order not to waste time in your research and thus facilitate your research, we have indicated the exact locations of these places on the map below. 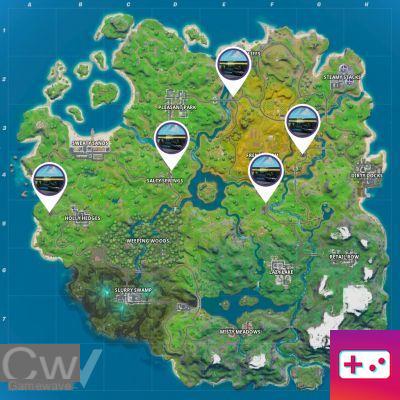