Author and references
Finding the original Jonesy is one of the special Arrow challenges, which highlights the character of Jonesy. We show you its location on our map. In addition to the traditional challenges, which are available every week, Epic Games has set up special challenges for certain characters in Fortnite. This is the case of Jonesy, who is also at the heart of a series of quests, the Challenges of the Arrow. These, in addition to exploring the lore of the battle royale, allow players to recover good rewards, whether XP or skins. To do this, you will have to validate the challenge asking you to find original Jonesy.

This stage is probably the simplest of this series of quests devoted to Jonesy. Almost all players know where to find the Original Jonesy, especially because it is in one of the most popular cities: Pleasant Park.

To find original Jonesy, so just go to the locality, and more precisely to its north. The NPC is still in the house in the house to the northwest, which is around the corner. When you are in front of him, you just have to talk to him to validate the challenge. 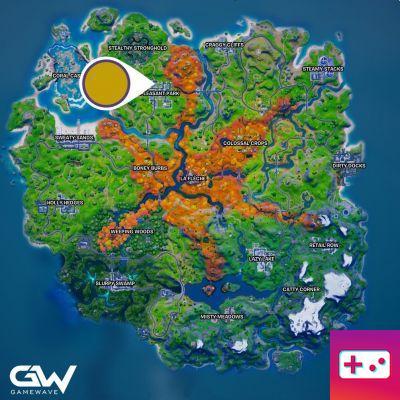 Be careful though, the second part will ask you to beat Jonesy in a duel, this is why it is strongly advised to come and talk to him with enough heavy weapons to defend yourself, but also a 100% shield. His epic primitive rifle won't do you a favor when the duel is launched.

You may not find it at first, in the days following its release, since many players will want to validate these challenges and will therefore have killed the Original Jonesy. You will then have to repeat the operation, until you can do it.
Audio Video Finding Original Jonesy, Arrow Quest
Find the back bling on the Chaos Awakening loading screen while wearing the Sorana outfit, Forntite ❯