Get information about Raz, Arrow Quest

For this challenge, which asks you toget information from a specific character, you just have to find Tarana, Lara Croft, Rebirth Raven, Pioupiou ou Epi and talk to them. Some of the characters are well known to players and will have no trouble finding them, unlike others who have been less prominent in the battle royale in recent weeks.

To help you locate them, just go to one of the places indicated on the map below. Once in front of the NPC, talk to him normally and select the "The Arrow" option, as you must now be used to. 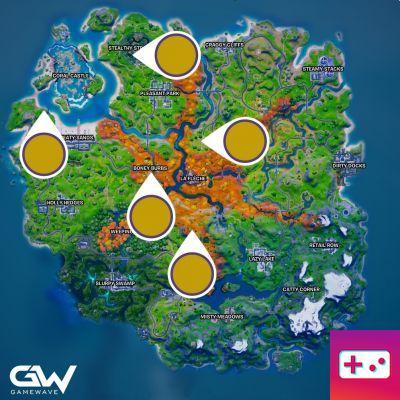 The operation must be performed with three different characters. Once done, you can move on to the next challenge, while collecting XP, which is never negligible.

As a reminder, when you are close to an NPC, you will see a chat bubble appear on the minimap, to let you know that a character is nearby.
Audio Video Get information about Raz, Arrow Quest
Obtain Research Books at Holly Hedges and Pleasant Park Week 8 Challenge ❯

add a comment of Get information about Raz, Arrow Quest