Author and references
Find our tips for the “Recruit a character” challenge counting for the fifteenth week of Season 5 of Chapter 2 of Fortnite. You can take advantage of our map and its locations to achieve it quickly. Even if Fortnite Chapter 5 Season 2 offers a lot of new features with random quests, Epic Games does not forget the famous weekly challenges, which come out every Thursday at 15 p.m. These challenges allow players to collect XP in order to progress through the Battle Pass and unlock many cosmetics and skin variants. One of the challenges will ask you, in particular, to recruit a character.

How to recruit a character in Fortnite?

NPCs have been around in Fortnite for many weeks, so you've probably had to recruit some since then. However, if you have never done it, we explain how to do so that you quickly validate this challenge.

First, make sure you have enough gold bars. You need 100 to recruit a character. If so, look for an NPC (we find them all over the map), talk to him and recruit him. The challenge is now validated, since you must recruit only one. A fairly easy task, then. 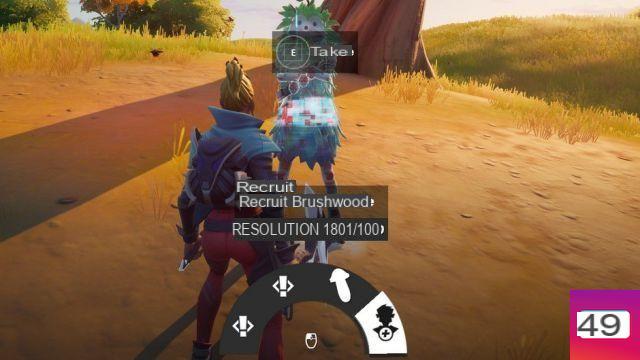 Know that the chosen character will now follow you wherever you go, and above all, it will help you against enemies when you engage in combat. Since not everyone can be recruited, here are the places where you can do so:

add a comment of Recruit a character, challenge week 15