Author and references
In order to get 5 stars as a reward, players with the Battle Pass will need to start by dialing Durrr Burger on the giant phone west of Fatal Fields. As in previous weeks and for several seasons now, Battle Pass holders have access to new challenges each week. allowing to win 50 battle stars is the equivalent of 5 levels. As a reminder, the Battle Pass is available in the store for the price of 950 V-Bucks or around €9,49. Only, for some time now, players without a Pass can also obtain stars by completing one of the three weekly challenges.

Indeed, for this eighth week of season 8, players with the Battle Pass will be able to obtain additional stars by completing one of the seven challenges. One of them is to dial Durrr Burger's number on the giant phone placed west of Fatal Fields. As you may have noticed, two giant phones have appeared on the island and must be used to complete one of the challenges of the week.

To find the giant telephone located west of Fatal Fields, you will have to land or go, if you are already in the game, on the snowy mountain. You will find in the middle of the few trees, the famous telephone on which is indicated the number to dial. For it, two possibilities, either with a pickaxe or with a weapon, but be careful you risk attracting opponents by firing shots. Also note that if you stand on the phone, you risk turning around when dialing the number and thus wasting time.

In order not to waste time, we have given you the location of the giant telephone located west of Fatal Fields on the map below. Once this step has been validated, you will have to do the same, but with the one located to the east of the Block. 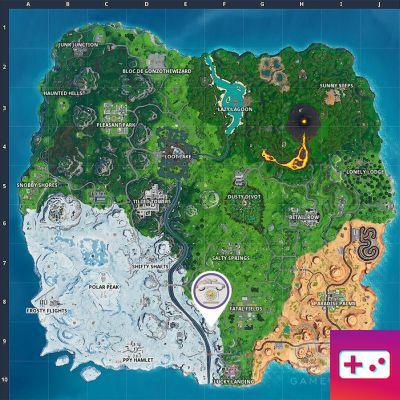