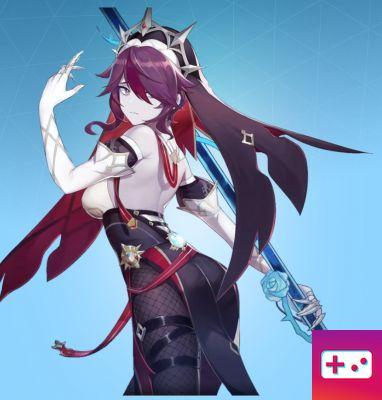 For Genshin Impact Version 1.1, four new characters were released, Childe, Diona, Zhongli, and Xinyan. Therefore, it's pretty safe to assume four can make it to 1.2. Two 5-star characters have been confirmed, Ganyu and Albedo, but the two 4-star characters are still a rumor. A few of these rumors suspect Rosaria to be one of them.

Rosaria is a 4 star Cryo user who uses Polearm as a weapon. She is a member of the Church of Favonius in Mondstadt. We know she's an upcoming character for Genshin Impact because Barbara, Fischl, Kaeya, and Jean in their profiles have voiceover lines for Rosaria. And when they have voiceover lines, that's a good indication that they'll become playable characters in the future.

Now, Rosaria is unconfirmed, but it is widely rumored that she will be one of the 4-star characters released along with Ganyu and Albedo in 1.2.

Remember that this information is basically a placeholder, but it's a rough idea. This article will be updated when more information becomes known or when the official update is released, so take it with a pinch of salt.

No information is known at this time. When we know more, this section will be updated.

Currently, few details are known about Rosaria. However, when we hear more information, this section will be updated.

Unfortunately, no information is known at this time. When more information becomes known, this section will be updated as soon as possible.