Ratchet and Clank: Rift Apart is finally available on PlayStation 5. One of the most anticipated releases of the year is the continuation of one of PlayStation's most beloved franchises.

Along with its history, there are many aspects of the game that have been well established. But whether you're a longtime fan or just playing for the first time, this Rift Apart tips and tricks guide covers the basic methodology for combat, exploration, and collectibles.

From using your wrench effectively, to understanding expert moves, and picking up all the shinies in the game, the tips and tricks below will help you get the most out of your time in Ratchet. and Clank: Rift Apart.

Your key is your friend and ideal for crowd control 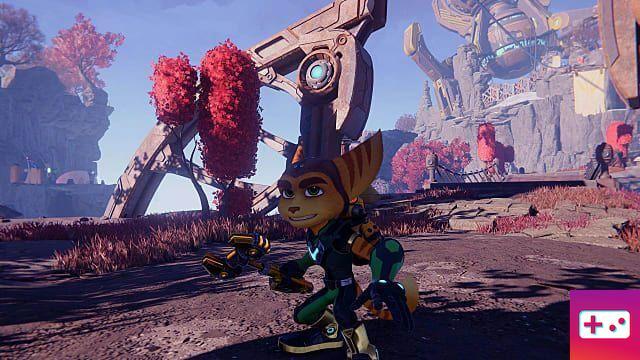 The first thing everyone should know about the Ratchet and Clank game is that the wrench is an absolutely vital part of the gameplay. Your wrench is your first and best weapon in every Ratchet and Clank game, and you should try to familiarize yourself with it. In Rift Apart, Rivet's Hammer works the exact same way, so everything about the key below also follows Rivet's Hammer.

It is excellent for crowd control, as you will often find yourself surrounded by multiple enemies. The ground slam is an exceptionally powerful attack that will take out enemies at any point in the game. That doesn't mean you have to use your wrench all the time, although it's a strategy that shouldn't be overlooked.

You'll also want to use your key to save ammo, as the ammo crates you find may not always have the type of ammo you need. It's also worth mentioning that in Arena Challenges, which require you to only use one weapon, you can still use your key without being penalized for it.


Strafe and use the Phantom Dash 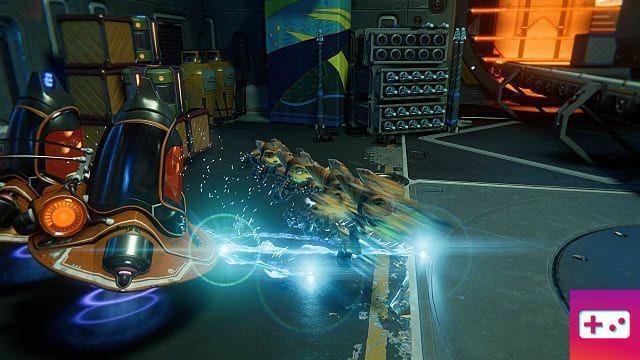 More important than the weapons you use, how you move through the various combat zones is vital to your survival. You'll strafe far more often than you'll walk, moving from side to side with a jump here or there to avoid oncoming fire. As in previous Ratchet titles, don't be afraid to move and jump freely in battle.

This is where Rift Apart also introduces a new mechanic, the Phantom Dash. It's a quick move that allows you to fly through enemy attacks without taking damage, although it takes about half a second for the landing animation to end. It can expose you to attacks from time to time, so be careful with your timing. (is there any suggestion for timing it well?)

Don't forget to zoom with the Hoverboots 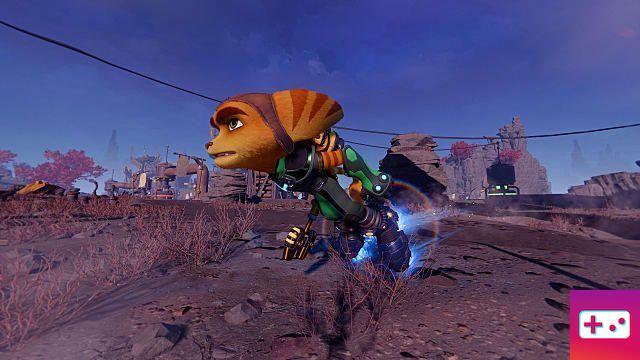 Rift Apart also reintroduces a fan favorite from the series, the Hoverboots. These now allow you to speed around the map, which is extremely useful for quick getaways in combat and for exploration. 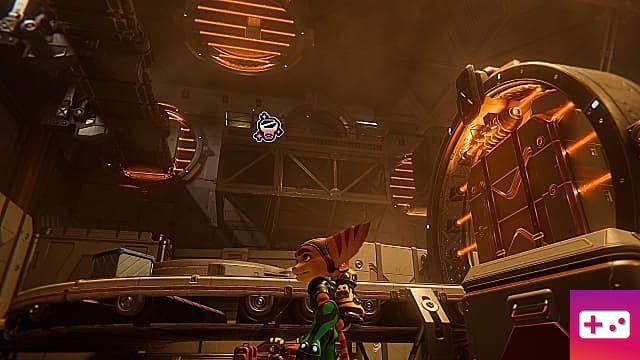 When I say look up, I mean looking around every room before you go is always worth it. Rift Apart has more than a few collectibles that simply hide on the platforms above, only accessible with your Rift Tether.


If you've traveled an area and are still having trouble locating a collectible, look at your map. Collectibles will appear on your map once you get close to them, and you can even place a pin there, which will help direct you directly to whatever you're looking for.

This shiny stuff is useful 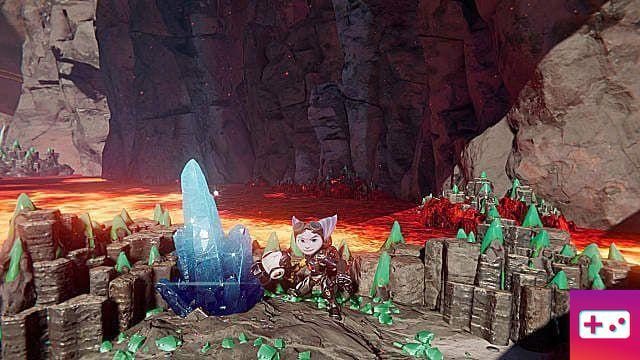 There are six different types of collectibles in Rift Apart:

Each of them serves its own purposes, and they are all important, although some are more important than others.

Bolts are the primary currency in Ratchet and Clank: Rift Apart with which you'll buy weapons and ammo, so it's important to pick them up and farm them every chance you get. Enemies drop lightning bolts like crazy after defeating them, but be sure to go grab them, as they don't automatically float towards you.

Raritanium is what you use to upgrade weapons, which makes it as vital as bolts. You'll find Raritarium scattered across every map, so keep an eye out. It has a distinct blue glow and crystal design. Sometimes it is attached to the side of a structure, sometimes to the ground. Just keep an eye open.

Armor can be found on regular maps, but it's mostly found in Pocket Dimensions, which are short platforming puzzles on each planet. Each piece of armor comes with a passive upgrade that increases when you find the rest of the set. Find all three pieces of armor and get the maximum bonus. For example, the Galactic Ranger armor gives you a 20% increase in melee damage.


The best part is that because the bonuses are passive, you'll still have the bonuses because you picked up the armor, so no need to wear it if you don't like the style.

Spybots aren't exactly necessary to find in the same way as Bolts and Raritanium, but you'll want to find all 10 for several reasons. Along with a backstory on each planet in Rift Apart, each spybot provides you with another piece of the Ryno 8 blueprints, a super-powerful weapon, and an Easter egg machine. You'll also get the Aim to Misbehave trophy in the process.

Gold bolts and lorbs are the two collectibles that would rank as the least necessary to collect, although I would recommend it. Gold Bolts provide cheats like infinite ammo and fun skins, game modifiers and extra photo mode stickers/frames. Getting 5 gold bolts also gets you the Nooks and Crannies trophy.

Lorbs are Lombax Orbs, they are only found on Savali. Collecting them all will give you a set of armor. They also provide more information on the lore around the Dimensionator. The armor set you acquire is the Wasteland armor set, which allows you to reduce damage taken from local wildlife on each planet.

Weapon wheels are like barley, they both have layers 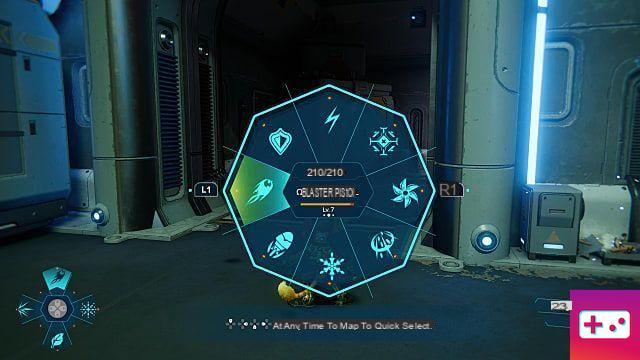 The final aspect you will need to understand about Ratchet and Clank: Rift Apart is, of course, your weapons. The franchise is infamous for its wacky, fun, and over-the-top arsenals, with Rift Apart continuing that legacy.

You'll quickly find your favorites as you go, choosing some over others based on your playstyle. But what's important to understand about combat in Ratchet & Clank is that you have to use the whole weapon wheel.

Layering different attacks and effects is key to clearing large groups of enemies and dealing heavy damage to the toughest enemies and bosses. Mr. Fungi, Topiary Sprinkler, Glove of Doom, and Bomber are all weapons designed exactly for high damage and crowd control.

While you let one of your weapons fire or stun for you, all you need to focus on is stacking that damage with your more traditional weapon of choice. This helps keep the pressure on while you do a quick dodge or regroup and recover health.

If you don't stack multiple effects at once, fights will simply take a lot longer and you'll constantly find yourself out of ammo for the weapons you're using. It's ultimately a recipe for making it harder for yourself, which no one wants to do.

So this is it ! Whether or not you've played a Ratchet & Clank game before, I hope this guide has helped you figure out how to best ace the new PS5 exclusive. If you're looking for more information on Ratchet & Clank: Rift Apart, check out our guides on how to acquire all the Zurpstones for Trudi as well as which weapons you need to upgrade first.

add a comment of Ratchet and Clank: Rift Apart Tips and Tricks Guide