Skul: The Hero Slayer Review – Ending the Tyranny of Heroes

Skul: The Hero Slayer is well aware of its genre: rogue-lite pixel art with soft narrative elements. It sits somewhere between Dead Cells and Hades in almost every way, borrowing elements from one and something else from the other. Luckily, it also has its own identity, built mostly around its premise: you're the villain of the story. At least by traditional standards.

In this game, the heroes are the generic fantasy mooks you'd kill by the dozens in any other fantasy setting. Orcs, witches, werecreatures – all are beset by the heroes of the world until all that remains is to save the demon king, it's you, a lowly skeleton.

The exchange of views creates an opportunity to see the emotional and psychological cost of the wrong things humans do when the victims are portrayed as totally irremediable. Make no mistake, some of what you learn throughout Skul would serve as fodder for any traditional adventure. The difference is that it's built on the backs of monsters that look a lot more human than the actual humans you encounter.

None of this heavy subject matter stops Skul from having some truly endearing moments and plenty of charm. Its mechanics are familiar but well-executed, and the enemies you face are as varied as the environments in which you face them. I'll be honest at first: I can't find much to fault the game. I have my complaints, but most of them are minor.

Skul: The Hero Slayer Review – Ending the Tyranny of Heroes 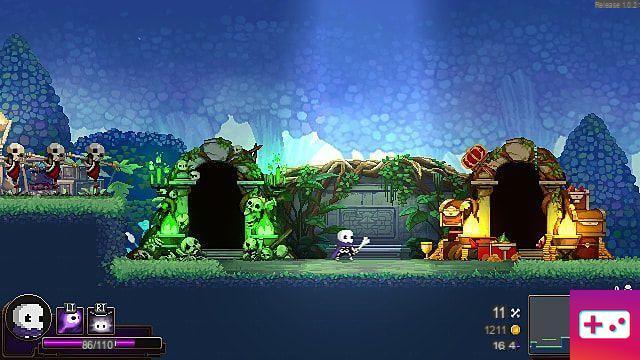 Many of Skul's gameplay and design ideas are familiar to anyone familiar with the rogue-lite genre. You start from scratch. Go shopping. Pass away. Come back with upgrade materials to increase your power and do more runs. You learn enemies and create strategies, find out what works for you and what doesn't, and experiment with new builds even as certain powerful abilities take you further than you're ready for.

You'd be forgiven for thinking you're getting a Dead Cells-style experience through and through. It won't take you long to learn that Skul takes a hybrid approach, adding some of Hades' decision-making requirements.

After each room you clear, you're greeted by two doors offering either gold, an item, or a random skull. The first two are simple. Gold obviously allows you to buy things. Items grant passive buffs and auto abilities. Skulls are where the game comes to life. There are over a dozen different options that override the wildcard you start with.

Skulls start at a common rarity and you can upgrade them all as you play, eventually reaching the limit overpowered Legendary version. There are also randomly dropped skulls that you can only acquire from skull rooms, and these can do a lot of heavy lifting even late in a run.

Much of the charm and fun of Skul: The Hero Slayer comes from the various skulls you can upgrade or discover. Just look at the Rocker's skull. He's a heavy metal skeleton that can summon a full band with a light show and pyrotechnics. Why? We do not care? It's funny and will melt the bosses.

Environments and enemy designs are also quite endearing or as disturbing as they are deadly. The second world is probably my favorite as Skul starts having fun with his enemies and environments. The Third World presents the depths of human depravity and final acts in stark contrast to all that has come before.


As with the mechanics, Arenas are in a middle ground between Dead Cells and Hades. They are technically random as far as their order goes, but the rooms themselves are static. This lends a level of consistency to each run, provided you've seen a piece enough times to know which enemies spawn where and when.

You'll develop a defined sense of mastery in a way you might not have in other rogues because at the highest level you'll know exactly how to play every encounter. No guesswork, no chance, just knowledge of your skulls and the enemies in front of you.

There's also a surprising depth to how you can optimize each run. Do you focus on getting the best skull you can find, discarding the rest of the bone chunks to upgrade them, or do you max out your gold for healing and easy items? Then, once you have the build you want, do you prioritize extra survivability or direct damage?

Familiar choices, sure, but much easier to get wrong than to execute as efficiently as it is done here in Skul. The reason here is simple: you can be a literal demigod and still watch bosses or unknown enemies wipe the floor with you. Knowledge and skill are as important as a good RNG because you will fail again and again without one.

The bosses themselves are as varied as their levels, and each one demands something different from you. Your first encounter with each of them is likely to result in a quick kill, meaning 10 minutes to an hour is gone in a matter of moments. The later levels are also particularly nasty, adding traps and other sources of environmental damage that are as likely to end you as any of the enemies themselves.

A crowded screen and other issues 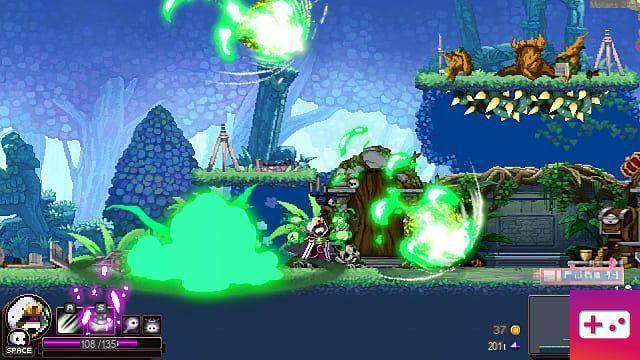 If I had to name one issue holding Skul back, it would be how cluttered the screen becomes almost as soon as you start playing. The problem only gets worse the further you go through a race, your own abilities and those of your enemies blending together in a hodgepodge of bright colors, flashing lights, and other visual noise.

The problem of enemy crowding can be particularly odious because there are rooms designed for dozens and dozens of them at once. There are plenty of abilities that clear rooms quickly, but if you're on a run without good compensating moves, one misstep can see a random group of ten knights hitting you ten times in a row.

There are also a few other annoyances. Some rooms are part of the challenge themselves, but in a rather boring rather than difficult way. Asking for precise platforming in a game where the platforming isn't stellar isn't the best design choice.

Then there is the game that bothers you. If you're unlucky, all you'll see on a run is common money and skulls, with no way to properly increase your power. Some enemies are more frustrating than difficult, either because of their attacks or because of how hard they hit. 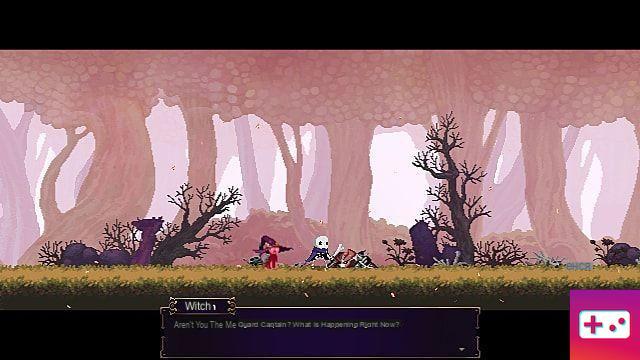 Like the game's core elements, Skul's music and art direction are high-quality, if not necessarily award-winning. The writing and world-building are good too, and there are plenty of humorous moments, and little (or not so little) nods to other games. Skeleton puns are also always appreciated.

As far as the narrative goes, the best part is how Skul plays with expectations. Combine the way he changes good guys and bad guys, the surprising changes to some of the later bosses, and his understated commentary on how we justify atrocity, and Skul rises above some of his peers.

Skul: The Hero Slayer falls into a category similar to something like Ghost of Tsushima. There aren't many new ideas on display, but everything here has been polished to a mirror shine.

The new mechanics add significant flavor and charm to an already strong package. Great music and art combined with satisfying combat and a hint of good humor make the spikes in difficulty bearable and the few frustrations bearable.

If you're looking for a game to scratch your rogue-lite itch with some fun twists, Skul is a fantastic choice.

[Note: Neowiz games provided the copy of Skul: The Hero Slayer used for this review.]

add a comment of Skul: The Hero Slayer Review – Ending the Tyranny of Heroes