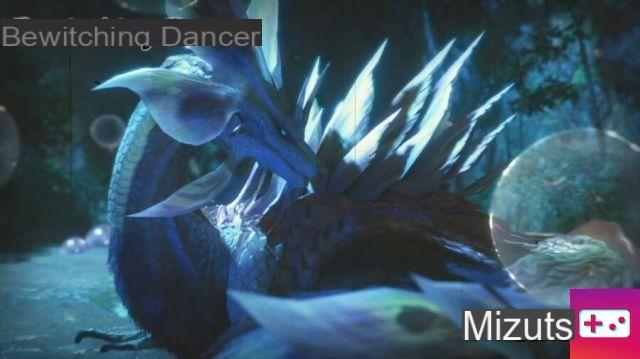 Monster Hunter Rise is a series known for pitting its players against various hostile wild animals. These monsters come in all shapes and sizes. Some monsters are tiny and some are massive, like the Mizutsune. This giant monster is at home in water and can use this element to decimate its opponents. Make sure you don't end up like his dinner by learning his weaknesses, resistances, and drop rates before you come face to face with this Leviathan.

Mizutsune's main weaknesses are thunder and dragon weapons. Be sure to use tools with these items to deal the most damage. Fire and Ice are useful if you don't have thunder or dragon options, but do much less damage in comparison. Do not use water weapons on Mizutsune.

Be sure to focus your attacks on the front paw, left claw, and right claw when using thunder, dragon, and ice weapons. Hitting Mizutsune here will deal the most damage. Aim for the neck or dorsal fin if you have a gun.

There aren't too many ailments that are very effective on Mizutsune, so be sure to capitalize on his dislike of Blast and Thunderblight. These types of attacks are sure to rock the beast with a flow of consistent attacks. Mizutsune is not immune to any type of disease, although other diseases don't do much.

Most monsters have breakable parts, and Mizutsune is no different. The head, fin, nails, and tail can all break off on this monster. If you break these pieces while hunting, you will earn additional rewards after completing the quest.

The tables below show the percentage and drop rates of each Mizutsune material, low and high rank.

add a comment of What are Mizutsune's Weaknesses, Resistances and Drops | monster hunter rise