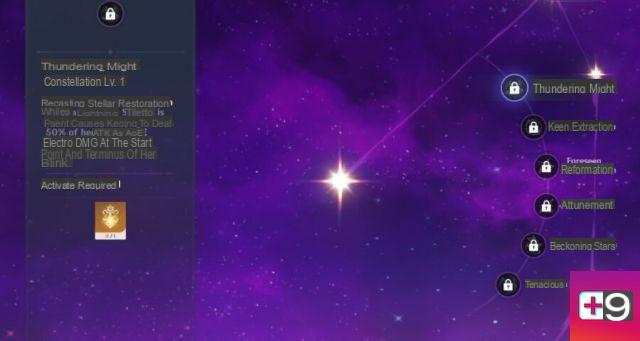 Genshin Impact is a gigantic brainteaser that has so many different mechanics to get used to, and then more pop up as you continue your journey. Upgrading your characters is an important part of any RPG game, and Genshin Impact is no different, but they do it in a slightly different way. Each character has four things that can be leveled up: a character level, attributes, talents, and a constellation.

That alone is a lot to understand, especially when we're only talking about one thing, and not how to upgrade weapons, stamina, etc. For this guide, we will only cover how to unlock the Constellation aspect of characters.

What is a Constellation?

The Constellation is akin to a character buff talent tree that, once the first constellation star is unlocked, begins to occur when a certain talent is used in battle. For this guide, we will use Keqing as an example.

Keqing has a combat talent called Stellar Restoration; this launches a Lightning Stiletto at its target, which is used by pressing E when playing on PC. This can be used in two ways, once the Stiletto hits, if E is pressed again, Keqing flashes there and slashes once, dealing Electro AoE (Area of ​​Effect) damage. If you instead use a charged attack near the enemy that was hit with Lightning Stiletto, Keqing will inflict a series of thunderous slashes at the target location, dealing AoE Electro damage.

His first Constellation Star is a passive effect that amplifies Stellar Restoration, called Thundering Might. If the player redoes Stellar Restore after the cooldown wears off and a Lighting Needle is still present on the battlefield, Keqing will deal 50% of his attack as AoE Electro damage at start and end of its blinking.

The first Constellation effect will be completely different with each character. Sometimes you will only get a passive for yourself; other times you can get a passive ray that affects all characters in range. Each character is unique, with 6 stars to unlock for each one.

How do I activate Constellations effects?

This Stella Fortuna is the item you need to start unlocking the entire Constellation, fortunately the material needed does not change or the quantity needed. Each character has 6 unlockable stars in a constellation, so you need 6 Stella Fortuna to unlock everything. However, the rarer your character, the harder it will be to acquire a duplicate, hence the grind and temptation to spend real money on Genshin Impact.

There is a second way to earn character doubloons and can be found in Paimon's Bargain shop, where you can spend Starglitter on 4 star rank items. Some 4-star characters are only there for a limited time before being shot for others, but they are very expensive; you can buy them for 34 Starglitter. However, Starglitter is the second rarest currency in the game and is only acquired by spending Wishes; this means you need to earn doubloons to earn more Starglitter, so you can afford and hope that a character you want a Stella Fortuna for will appear in the shop.

There's no way to tell if 5-star characters will appear in Paimon's shop at any given time, and if they're the same price as 4-star characters, alas, only time will tell.