Sea of ​​Thieves: Where to find the Kraken

Many veteran players have yet to encounter the Kraken in the sea, though this is definitely a moment every fan of the game should experience. Although a big factor in finding it is luck, there are things you can do to increase the chances of encountering this beast.

Achievement Hunters will be rewarded for their efforts if they manage to defeat the Kraken, unlocking the "Kraken Good Job" achievement. Kraken difficulty will depend on the ship you are using and the size of your crew, but a full crew is always recommended.

Sea of ​​Thieves: Where to find the Kraken 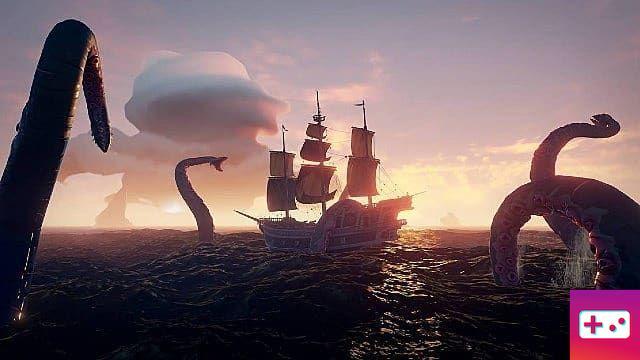 As stated earlier, it takes a lot of luck to find the Kraken, as it has no set spawn location or time. It's mostly random, although there's some information you can use to skew the odds in your favor.

Technically, you're not going to "find" the Kraken, but rather put yourself in a place where the Kraken can easily find you. To do this, you will set a course for deep seas, when there are no active cloud events on the map.

The deep sea is where the Kraken is most likely to spawn, and active cloud events, such as Skeleton Fleet ship clouds or Skeleton Fort skull clouds, decrease the chances of you being exposed to the monster.

Once you are in the deep sea, stay there and keep sailing. The Kraken is a rare encounter, so it might take a while, but since you have maximum exposure to it, it should eventually happen to you. You will know it has arrived when the water around you begins to turn black. Once you find the Kraken, you can try your hand at defeating it.

Sea of ​​Thieves: How to beat the Kraken

It's recommended to enter this encounter with plenty of cannonballs to go, so make sure you're well supplied before venturing out into the open sea.

You should see plenty of tentacles rising out of the water around the ship, and you'll want to aim for the thicker parts of each when cocking the cannons.

If you are firing a gun, aim for the "head" of the tentacles.

If you get grabbed by a tentacle, start stabbing it with your sword until it lets go. If this pulls you into the water, stay submerged while you return to the boat, as the layer of ink on the surface of the water can damage you.

Back on the boat, make sure you're still on the attack. The Kraken will damage your ship over time and can sink it, so time is running out. Note that you don't need to destroy all tentacles. You just need to do enough damage to the Kraken to scare it away.

If you can inflict enough damage on this beast and live to tell the tale, you will be rewarded with an achievement.


Be warned that it is known to be quite buggy, sometimes positively, sometimes negatively. Some players have reported unlocking the achievement even after sinking their ship, while others have unlocked it, simply by watching other unfortunate souls fight the Kraken from a safe distance. A few people even reported it not unlocking after killing it and having to do it again.

Defeating the Kraken is one of the coolest things you can do in Sea of ​​Thieves, so if you've never had the chance, be sure to stock up and head to them. sea ​​depths. It's not an experience you want to miss.

Audio Video Sea of ​​Thieves: Where to find the Kraken
Sega announces the Yakuza movie and takes the fight to the big screen ❯

add a comment of Sea of ​​Thieves: Where to find the Kraken